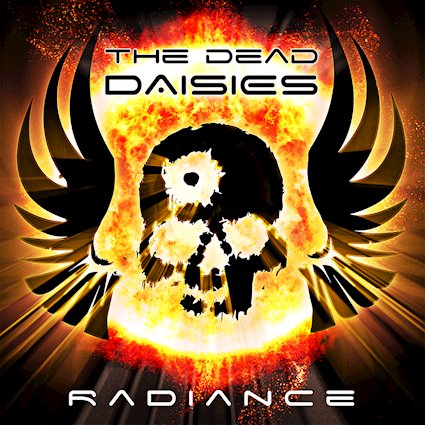 Let me take you on a journey back in time – and you can probably thank whatever god you believe in that the website wasn’t around then as I’d never have shut up – but in 2010 a record came out that I think was probably the best of this millennium so far. It began me on a path to my favourite guitar player and to my favourite voice.

Over the next seven years or so, Black Country Communion released a few more records and I saw them live twice. One was their first ever gig.

Fast forward to 2019 and that singer Glenn Hughes, was announced as the singer in The Dead Daisies. The band have done this since they formed. Their history is well known. Their history doesn’t matter. Because – drum roll, I am about to make a sweeping statement – The Dead Daisies are right now the finest hard rock band on earth.

They hinted at this on 2021’s “Holy Ground”. They’ve made good on it on “Radiance”. It can’t be coincidence.

It’s been out a week, I’ve had it longer, I’ll explain why the review is late, however I will say that the first time I listened to it (this is genuinely true) it almost caused me to crash my car. The first chord on “Face Your Fear” hit and there’s a bass groove. I was playing it loud and it caused so much vibration that I thought it was falling to bits on the M40. I can reassure the good people of Honda that their vehicle is still good, and its instead the fact TDD are utterly thunderous.

In Doug Aldrich, Hughes has the perfect foil (the same was true of Joe Bonamassa in BCC). The great bands need a guitarist and singer in synergy, and my goodness they’ve got an understanding here. There’s a moment in “Hypnotise Yourself” where that Hughes roar comes out in the chorus and Aldrich plays the lead with all that West Coast cool and you understand how good this band is.

“Shine On” gets its head down and heads for the nearest border. It’s the sound of limitless possibility. The sound of dreams, and even on the title track, where its groove is darker and slower, there’s a suggestion that everything, you know, might just be alright in the end.

Brian Tichy on drums anchors down “Born To Fly” – and the chorus soars, appropriately. The beauty of this one, though and indeed all the others, is that they don’t sound dated. They just sound “classic” and its something of a gift. “Kiss The Sky” goes down a funky, sort of Dan Reed Network road, and there’s a heavy blues feel to “Courageous”, but ultimately, whatever the subtleties it just sounds like a band with a total mastery of what it wants to do.

It’s strikingly heavy too. “Cascade” is typical in that there’s no hint of mellowing with age. It’s not angry, though and the words are unmistakably Hughes’ in that they are mystical, spiritual and you’d probably need to ask him what they mean. The ambiguity, however, means they mean what you want them to mean making TDD your band, almost.

“Not Human” rockets along, and what is a relatively short album – not one for excess fat – ends with the mid-paced “Roll On”. The closest this gets to a ballad, “I am a working man” sings Hughes as its first line and maybe that’s the point with The Dead Daisies. To cram as much in as possible. No other band has been as active in the last ten years or so. And of course, no other band has re-invented itself like this.

Which leads on to the only member of the group we haven’t mentioned. David Lowy. It’s his thing, his vision and you wonder if he ever stops and thinks: “blimey this has worked out better than I dared to dream.”

Which is partly why I am only writing about it now. Doing these reviews every day means you maybe listen to a record twice and form snap judgements on it. I’d listened to “Radiance” and decided it was hard rock record of the year after the first time I heard it. So you think, “I’ll give it a few more goes and live with the songs a bit…..”

Yeah? Well look, “Radiance” is the hard rock record of the year.