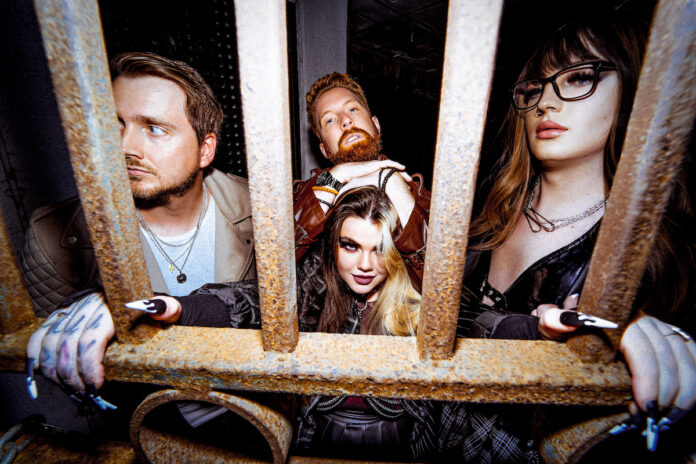 Fresh from a first play on Alyx Holcombe’s BBC R1 Introducing Rock show, Blackburn alt-rock newcomers NOVUSTORY are pleased to reveal the video for their empowering new single ‘Give Me Fire’, which is set for release on 5th October 2022.

The band recently announced a mix of support slots with Gen & The Degenerates and headline October/November 2022 UK tour dates, with tickets on sale now (see below for listings).

Commenting on the new track, vocalist Imogen Storey says: “Writing and self recording our brand new track ‘Give Me Fire’ was our way of capturing that feeling you get in your belly when you look at someone and nothing else matters in the world. It’s a track about those people who make you come alive, who breathe life and energy into you and give you a reason to keep going. It’s the closest thing to a ‘love song’ we’ve ever written, and from a production perspective it’s the sparkly, rocky path I want us to continue on.”

Starting their journey making noise in a shed together, NOVUSTORY are a shining example of what it means to be a DIY artist in the 21st century. Fast forward a few years of pure graft, and you’ll now find them in the custom studio that they’ve built in Blackburn, recording their own material and working with other bands for a living.

The last few years have seen the band go from strength to strength behind the scenes, receiving support from Virgin Media, Kerrang! Radio, Planet Rock, GLAMOUR, and stations across the BBC Introducing network.

Building a completely organic, dedicated fan base (The Novusquad) through their bustling social networks (boasting just shy of 50k Tik-Tok followers)—where they often do crossover interviews and features with other bands—the members’ barrage of well-produced vlogs, reels, memes and stories have done the heavy lifting for them, directly connecting them with an international audience who are already chomping at the bit for new releases and tour dates.

Over the years, through solid networking and persistence, they’ve managed to not only build up major endorsements with the likes of sE Electronics, Invaders Amps and Amedia Cymbals, they’ve also taken themselves on 3 European tours in a banged up Land Rover—camping, busking, playing festivals and taking their “explosive and mesmerising” live performances across the UK, Amsterdam, Belgium, Italy and France.

The band have also previously worked with big-time producer Cecil Adam Bartlett (Biffy Clyro, U2, Nothing But Thieves) and renowned vocal coach Stevie Lange (Robbie Williams, Rita Ora, AC/DC), and master all their tracks at world famous Abbey Road Studios, whilst the video for their 2022 single ‘Love Me Too’ features celebrated British-Pakistani comedy star Tez Ilyas, who they befriended after working with him in their studio.

New single ‘Give Me Fire’ is released 5th October 2022