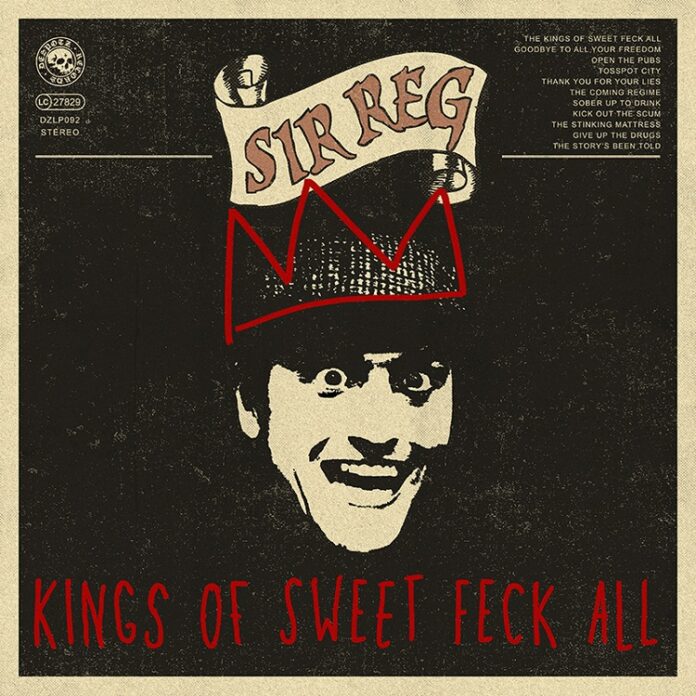 Let’s get the bleeding obvious stuff out of the way, shall we? Sir Reg are from Sweden. They sound as Irish as Jimmy Crickett’s Wellies (that’s a reference for the kids right there!)

Brendan Sheehy, moved from Dublin to Scandinavia, and when he did, he had a desire to make the music that is as Celtic sounding as The Pogues. Thus Sir Reg were born. And The Kings Of Sweet Feck All” is their sixth record.

Now the good stuff. This is so much damn fun that if you don’t enjoy then, honestly, just piss off and watch GB News. It’s all you deserve.

The title track, sort of like what a cèilidh would sound like if The Levellers were the house band, deals with struggle. Most of them do. This is a Republican marching song to all intents and purposes: “They searched the house, the wood and the bricks/And all they found were hurley sticks/The man had made his mind up, they were a weapon against the crown” sings Sheehy, and its so catchy it is not safe.

“Goodbye To All Your Freedom” rails against the media and our leaders (this is a recurring theme) and even if this isn’t your fight, then I dare you to resist the tune.

The genius (and I don’t use the word lightly) of what they do is never better shown than on “Open The Pubs”. I don’t drink. Never have. And at precisely 3.03pm this afternoon I was sat at work, singing this chorus to the chap who sits next to me: “The pubs they are closed and we can’t buy a beer/I’ve been fucked during lockdown, this lousy year/My liver is screaming to feed him a sup/So come on you bastards and open the pubs.”

Quite honestly, its impossible not to enjoy this. “Tosspot City” should get anyone who’s ever loved Ferocious Dog to the nearest record shop, the ballad “Thank You For Your Lies” brings it down a touch, but only so the flute can really hit home.

Like many of them it seems as if that one is to exorcise demons in lockdown, and the most “punk” of them all “Coming Regime”, has anger to spray all over like a sawn-off.

If this is a record that is made up of either drinking songs or anti-establishment tunes, then “Sober Up To Drink” is one of the former and the majestic “Kick Out The Scum” is definitely the latter. As someone who has a twitter background that proclaims that Tory’s are lower than vermin, there’s much agreement here.

“The Stinking Mattress” might be a sea-shanty. So full of beans is it, that you don’t notice that it’s about homelessness at first. Which almost is what Sir Reg do in microcosm. That all being said, there’s no doubt about “Give Up The Drugs” – and I’d hazard a guess that its written with someone particular in mind – or indeed the last one “The Story’s Been Told”, which survey’s the life of Sheehy and reckons that its all turned out all ok.

Look, there’s many ways to enjoy this record. Either superficially with a pint of Guinness in your hand and a load of mates around for a communal sing-song, or deeper by listening to the message here and feeling empowered/despairing to suit. Truth this, it doesn’t matter, as long as you love it. “The Kings Of Sweet Feck All” is a royal command performance. Even if the monarchy should be abolished.