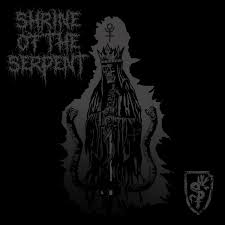 Deathly doom spreads across the USA courtesy of Portland’s finest.

“9 Gates of Shadow” is the first of the three track EP to torment your soul. Spoken words intros are par for the course in the genre but Shrine Of The Serpent keep it to a minimum and thereby increasing it’s effect. The track is one-paced, in a good way, it’s a sludge-like crawl through the mud and blood of eternal damnation. The atmosphere is consistently heavy and over hangs the music ensuring that it stays focused on the intense chills that the demonic rhythms induce.

“King In Red” follows and does not let you off the meat-hook. It’s close to ten minutes of utter pain and misery set to the rhythmic death stomp.

The sense of impending doom is the blood that runs through this EP’s veins. The end is coming and there will be no escaping it. The slow death metal power riffs of guitarists Todd Janeczek and John Boyd work to unsettle whilst the voice vocalizes what the music is already telling you.

“Gods of Blight” seals the deal with the devil. This is truly the end of the road. Like a funeral march could be said to echo your descent from this world to the next the “Gods of Blight” could be the welcoming track from the other side. The other side of Hell that is.

It’s like a slow death and if the end is coming then SOTS are ready to embrace it. One listen to this EP and you may feel inclined to join them. This is a mightly impressive way to go.

Tracklisting:
1.9 Gates of Shadow
2.King in Red
3.Gods of Blight