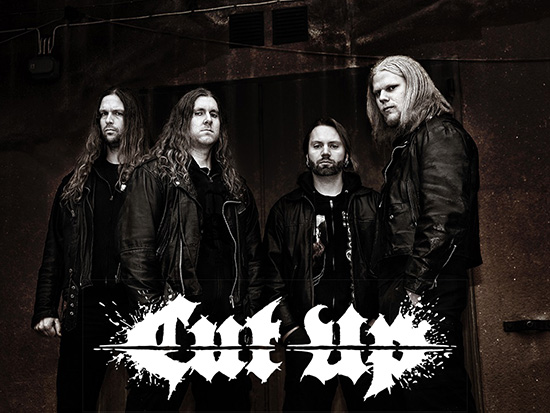 Debut album to be released this summer!

Legendary label Metal Blade is proud to announce the addition of Swedish Death Metallers CUT UP to it’s roster!

CUT UP were founded by drummer Tobias Gustafsson and vocalist/bassist Erik Rundqvist in early 2014. After disbanding Vomitory by the end of 2013 after 24 years of death metal duty, the two felt it obvious to continue creating death metal together. Very soon, guitarist Anders Bertilsson and guitarist/vocalist Andreas Björnson were recruited and CUT UP was complete. Both Bertilsson – who was previously and most notably in Coldworker (2006-2013) – and Björnson – also known from Fetus Stench – share the same musical ideals as Gustafsson and Rundqvist as well as the passion to play live.

The next months followed with hard work, writing and rehearsing, and in November 2014 they entered the studio and recorded 11 songs for the yet untitled debut album. With the band members’ collective resume and repute in the metal scene, you can expect nothing but violent, catchy, groovy and grinding death metal from CUT UP.

More info on the debut album, a first track and the front art will be announced and revealed shortly!

Comments drummer Tobias Gustafsson: “I am very happy, proud, honoured and excited to team up with Metal Blade Records once again, this time with CUT UP! Can’t stay away from playing death metal, obviously, so it feels fantastic to have this murderous ensemble together so soon after putting Vomitory into eternal sleep. Cut Up is not just “another project”, but all four members’ new main band. We have made a debut album that we are tremendously satisfied with, both material- and production-wise. We can’t wait to let you hear it! Cut Up aim to hit the stages as soon as the album is released, so we hope to see you all in the front row and in the pit!”