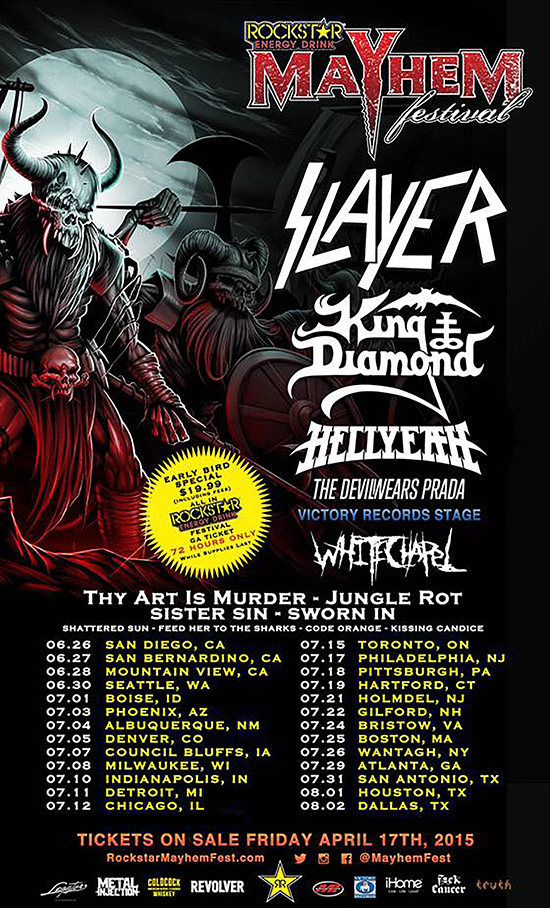 Mega line up for US Festival tour

General Admission Festival and Lawn Tickets are only $19.99 including all fees

For the first 72 Hours of Onsale (while supplies last)

The ROCKSTAR ENERGY DRINK MAIN STAGE will feature some of the most ground-breaking heavy bands of all time, spanning the originating years of heavy metal to today! The main stage will feature five-time-nominated, two-time Grammy winning legends Slayer as headliner, as well as additional performances from King Diamond, HELLYEAH, and The Devil Wears Prada. The VICTORY RECORDS STAGE will feature headliner Whitechapel as well as Thy Art Is Murder,Jungle Rot, Sister Sin, Sworn In, Shattered Sun, Feed Her To The Sharks, Code Orange andKissing Candice.

Kerry King, guitarist of ROCKSTAR ENERGY DRINK MAIN STAGE headliners Slayer states, “I don’t know if third time will be a charm, but it will definitely be hellish! Slayer and King Diamond on stage for the first time together in the States- NEVER has Mayhem been more evil. DON’T FUCKIN’ MISS IT.”

ROCKSTAR ENERGY DRINK MAIN STAGE performer and heavy metal hellion King Diamond states, “This is going to be one hot and hellish summer! Slayer and King Diamond on the same stage – it does not get more devilish than this! We will be putting on a one hour set with the full King Diamond stage production. As for a set list, I’m not gonna reveal that here, but it will be built around “Dreams of Horror”. The Puppet Master will be there with Grandma, and we will even go as far back in time as to 1777 (hint). You’re all in for one hell of a show if you come to this Sabbath!”

“It has been eight years and it feels like it started just yesterday. We are so excited about this year’s lineup and having the mighty Slayer back in support of a new album. In addition, the first time for King Diamond and HELLYEAH will be awesome, as well as The Devil Wears Prada’s first time on the Main Stage. The Victory Stage has amazing bands and will play throughout the day. Heavy music is thriving in America and we are excited to be a part of it,” state John Reese and Kevin Lyman, ROCKSTAR ENERGY DRINK MAYHEM FESTIVAL producers.

Read the RollingStone.com Exclusive Line-Up Announcement with a Special Video from HeadlinersSlayer HERE

The festival will kick off on June 26th at Sleep Train Amphitheater in San Diego, CA and ends at Gexa Energy Amphitheater in Dallas, TX on August 2nd. See below for all confirmed tour dates.

* Lineups in each city may vary. Go to www.rockstarmayhemfest.com for full lineup details.

Slayer
The Chicago Tribune’s Greg Kot wrote that the five-time-nominated, two-time Grammy winning Slayer is “one of the great American rock bands of the last 30 years, forget about genre.” Their membership in “The Big Four” – Metallica, Slayer, Megadeth and Anthrax – the four bands that defined the thrash/metal genre – secures their place in music history. Indeed, few bands come close to matching the intensity that Slayer brings to its live shows, having been named “Best Live Band” by numerous media outlets including Revolver, SPIN, and Metal Hammer. With songs that mirror the turmoil and aberrations of our society – God’s terrifying global genocide, the chaos of our broken political system, chemical warfare, the hideous minds of serial killers, and the way-too-close proximity of world horrors that technology has brought us, Slayer remains crushing and brutal, steadfastly refusing to cater to the Mainstream. Slayer’s founding member, guitarist Jeff Hanneman passed in 2013, and Exodus guitarist Gary Holt has been filling in since. Paul Bostaph, who was Slayer’s drummer from ’94 – ’01, has rejoined bassist/vocalist Tom Araya and guitarist Kerry King, and is back behind the kit. Slayer is currently in the studio recording a new album set for a 2015 release.

King Diamond
King Diamond’s Dreams of Horror double album was released in November of 2014 and is the only best-of compiled and approved by the band. The tracks were remastered and enhanced by Andy LaRocque and King Diamond himself. Give Me Your Soul…Please, King Diamond’s 2007 full-length, was nominated for a “best metal performance” Grammy Award!

HELLYEAH
HELLYEAH is comprised of Chad Gray (Mudvayne), Vinnie Paul (Pantera, Damageplan), Tom Maxwell (Nothingface), Kyle Sanders (Bloodsimple) and Christian Brady (Magna-Fi). Their current album, BLOOD FOR BLOOD, is a welcome return to form. It leaves a mark, thanks to songs like the angular, vengeful “DMF,” a song birthed by the sort of anger that can’t be faked; it will leave you wondering who pissed these guys off. “Gift” is dirty, rowdy rock with equal parts groove and swagger, but also possessed of the sort of punk rock energy that would make Motorhead fans turns their heads. Then there is moodier, more contemplative fare like ” Moth” and “Hush” which connect on an emotional, cellular level, proving that you can be incredibly heavy in ways other than loud and fast. “Hush” is taking Rock radio by storm – among the most-added records in each of its first 3 weeks at theformat. The video for the track debuts upon this tour announce – see it atwww.hellyeahband.com

The Devil Wears Prada
The Devil Wears Prada recently announced their return to Rise Records and their next release, a conceptual EP entitled Space, coming in summer 2015. The Space EP marks the band’s first concept release since Zombie and the first on Rise Records since their sophomore release, Plagues, in 2007. Zombie debuted at #11 on the Billboard Top 200 Album Charts in the summer of 2010. The band is currently headlining the “Zombie 5 Tour” to celebrate the fifth anniversary of the acclaimed EP.

Whitechapel
Whitechapel’s Our Endless War was released in April of 2014 and it debuted at a staggering #10 on the Billboard Top 200 charts, as well as #1 on both the iTunes rock and metal charts. Watch Whitechapel’s latest video, the intense and bloody Mitch Massie-directed “Let Me Burn”, nowHERE.

Thy Art Is Murder
Australia’s incendiary extreme musical export Thy Art is Murder, return with one of the most anticipated releases of the year. Produced and mixed by Will Putney (Suicide Silence, Exhumed, The Acacia Strain), Holy War is the band’s second release for Nuclear Blast Entertainment and third full-length album overall. Holy War will be available in various formats (digital; limited digi-pak + bonus track; assorted color vinyl; exclusive mail-order picture disc) and unleashed in North America on June 30th, in Europe & Australia on June 26th, and in the U.K. on June 29th.

Jungle Rot
American death-metal band, Jungle Rot, has been providing the masses with headbang-worthy anthems since their formation in 1994, with recent notable touring including runs with Suffocation, Kataklysm, and a killer performance on the 70,000 Tons Of Metal Festival Cruise 2015. Fans can expect a new Jungle Rot album this June, just in time for the Mayhem to begin.

Sister Sin
Lead by one of Revolver Magazine’s Hottest Chicks of 2015, Liv Jagrell, Swedish heavy-metal band Sister Sin have been riding high since the release of their October 2014 album, Black Lotus. Currently wrapping up a hugely successful, high-voltage tour with UDO in Europe, the no-nonsense four-piece is ready to take over the States once more, delivering a real dose of rock ‘n roll to the masses.

Sworn In
Chicago’s Sworn In just released their second album, the conceptual The Lovers/The Devil, this past Tuesday April 7th while on the road for their first-ever headline tour.

Shattered Sun
Poised to dominate the metal scene comes Texas melodic metal six-piece, Shattered Sun, with their Victory Records debut album, Hope Within Hatred (out April 21st). Currently crushing venues across the US as direct support to Testament and Exodus, Shattered Sun has come along “with all the riffs, all the hooks and several fucktons of heavy metal fury” assures Metal Hammer.

Feed Her To The Sharks
Australian quintet, Feed Her To The Sharks, are out for blood and proved such with their 2015 Victory Records debut album, Fortitude, which was applauded by BLUNT Mag for “taking metalcore back to its riffy, growly roots”. Having conquered their own metal scene, performing on the 2013 Van’s Warped Tour Australia and constant touring since, this band is ready to unleash their dynamic, merciless live show onto the masses this summer in the States.

Code Orange
Code Orange’s I Am King was released in September of 2014 and debuted on the Billboard 200 at #29. The album quickly peaked at #10 on the Billboard Top Hard Rock Albums chart and has gained rave reviews from music critics and fans alike. Watch Code Orange’s latest video, “Dreams in Inertia”, HERE.

Kissing Candice
Theatrics are promised with each performance and every listen of New York’s gore-metal purveyors, Kissing Candice, who will be unleashing their Victory Records debut album this summer in time for the Mayhem festivities. Can’t wait? Catch the blood-soaked, masked madmen of Kissing Candice performing alongside Twiztid and Davey Suicide, beginning May 1st.

Remember – get your tickets beginning Friday, April 17th at 10:00am local time! We’ll see you in the pit!

About Rockstar Energy Drink:
Rockstar Energy Drink is designed for those who lead active lifestyles – from Athletes to Rockstars. Available in over 20 flavors at convenience and grocery outlets in over 30 countries, Rockstar supports the Rockstar lifestyle across the globe through Action Sports, Motor Sports, and Live Music. For more information visit: www.RockstarEnergy.com