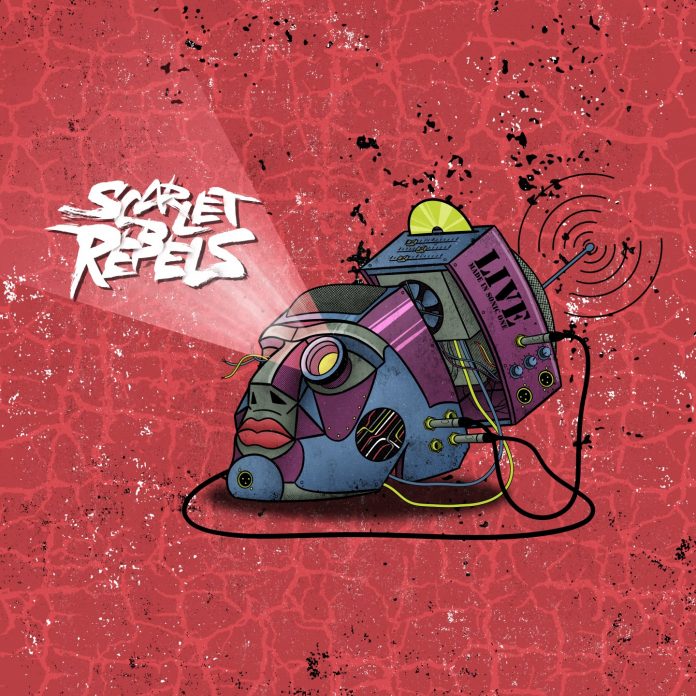 Back in 2016, I was rediscovering my passion for rock music and stumbled across an album called ‘Keep Fighting’ by Welsh band, V0iD. It knocked me out. It was the quality of the songwriting, the strong vocals and a lovely, crisp production that hooked me. I narrowly missed seeing them support Graham Bonnett that year but kept an eye on their social media for other opportunities.

In late 2017, they had a change of line-up and name, becoming Scarlet Rebels. I finally got to see them play a gig in Scotland in 2018, and it was in a live setting that the real strength of the songs became apparent. Fast forward two years, I’ve seen them six times, they released their debut album ‘Show Your Colours’ under their new band name, toured relentlessly, and gained a lot of critical acclaim, including winning Guy B Rockshow’s ‘Band of the Year 2019/20’.

With Covid-19 striking down so much of the normal activity bands would undertake this year, Scarlet Rebels, like lots of others, were invited to take part in some live streaming events. To accommodate this, they repaired to Sonic One Studio in Wales and recorded (and filmed) a short set. The response from those listening and watching, and their own justifiable pride in what they’d produced, led to it being released as a mini-album via Rock Of Angels Records.

What you’ve got here is a live album, recorded in one take, with no overdubs, minus the obligatory crowd noise between songs. And what a set of songs they are. It’s a testament to the musicianship of these guys as to just how good this sounds. But, again, I would return to my assertion that the real key to their success is the songs – hooky, sonically dynamic and so well-crafted.

Front and centre is the powerful, melodic voice of singer, guitarist and main songwriter, Wayne Doyle. To accompany him is a rock solid rhythm section of his brother, Gary, on drums and Wayne ‘Pricey’ Esmonde on bass. There’s a triple guitar threat here. As well as Wayne, there is an extra layer of rhythm guitar provided by Josh Townshend (yes he is related to that guy you know with the same surname). This fills out the sound and adds lots of subtle but important colours. To top all this off, Chris Jones handles lead guitar. He’s got everything you’d look for in a proper rock lead. He can shred with the best of them but he’s got finesse as well, a melodic flourish and, if you get to see them live, hair to die for!

There are seven tracks, and they are all superb, but the highlights for me are the emotionally charged ballad, ‘Heal’, and the driving, melodic powerhouse, and former V0iD song, ‘Not The One’. The production, and the balance of the mix, is excellent. As an introduction to the band it’s a great starting point. As a souvenir of a weird time, and a way to make the best of a bad situation, it’s a triumph.