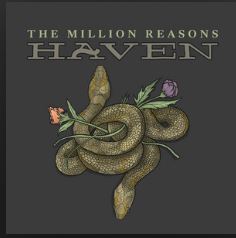 My favourite album of 2021 (probably) was ‘Love From The Underground’ by Polarizer. It’s a simply brilliant album. The singer from Polarizer is Taylor Brennan but, as it happens, he’s also the singer with The Million Reasons. This is a good thing. A very good thing. You see Brennan has one of those voices. You know, one of those compelling and amazing ones, with superb tone and pitch, that just … works. Every line, in every song. Every time.

‘Haven’ is the debut album from TMR, despite having been a band since 2016. After multiple line-up changes, they released an EP in 2021, but it has since been partially subsumed into this full-length effort. And what a belting effort it is too.

Opening track ‘Oh, Tranquilizer’ sets the tone nicely with an upbeat riff and driving backbeat, but as soon as Brennan comes in with that first line, you know you’re not listening to any old rock band. He just has such a deft touch when it comes to melody and phrasing. However, it’s not a one-man-band. There is some great guitar work on show here too. Clever layers and some incendiary solos.

‘If Not The Fire’ opens with a rollicking bass riff, and the bass playing in this song (and the rest of the album) is so good. See, it’s not all about Brennan. He is very good on this as well, though.

Lyrically, we’re a world away from rock cliches and basic rhyming couplets. Paeon to lost love, 1985, has the line, the only priceless thing is time. As a card-carrying member of the old git club, I have to say this is absolutely true. All of us, regardless of our age, can empathise with this sentiment. It’s also a catchy little number. And, how about this for a line from Coup de Grace? Both the cigarette and the trigger await the flick of my finger. Lovely stuff.

For me, the stand-out track is one that’s migrated from the EP to the album. ‘No North Star’ is a stirring, beautiful, emotional song. It opens quietly, with acoustic guitar and cello sinuously wrapping around each other. There are more wonderful lyrics like, praying to the god of sorry, I’m sure she has questions for me. Slowly but surely, the instrumentation increases as it builds to a crescendo and Brennan signs off with the lines, I couldn’t lie when you asked me to lie, but I’d die if you asked me to die, If I’m going to die, I might as well do it for you.

Album closer ‘All You Can’t Afford’ is an angry break up song. I’m taking the keys to my heart, and your car. Brilliant. It’s also a tune.

I sense this album will be high up my rankings come the end of 2022. And, if you’re as big a fan of Brennan’s voice as I am, then please also give Polarizer a listen. I don’t think you’ll be disappointed.