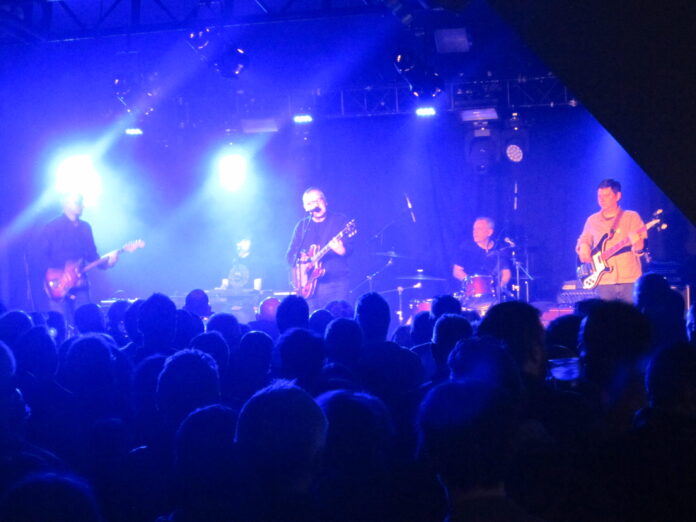 First up tonight were Norway’s Frøkedal & Familien, a band especially chosen by the headline act to support them on their fifteen date sojourn of the UK, Ireland, and Scandinavia. The band have their third album `Flora` out next month and are in essence Anne Lise Frøkedal with the addition of two guys and a girl which make up the Familien (family). This folk-pop quartet share a delightful thirty minute set which began with the dreamy `Takedown` followed quickly by `I Don’t Care` and `David` a song about happiness. The instrumental `Spinners` which we were told was a dance music number broke up the set before the home stretch included numbers like the delicate `Cracks`, the faster and much more powerful new single `SØN`, `Dreamer` before closing out with `Set Your Spirit Free` where the bands vocals really gelled together. This was a really captivating half hour and if I were to describe the sound I’d say it lay somewhere between Joni Mitchell and Vashti Bunyan. A band I definitely want to catch again.

In the late eighties, early nineties a good friend worked as a part time pr person in London and a DJ in Birmingham. I travelled a fair bit and in exchange for a slab of cigarettes, he gave me numerous promotional CDs by bands I sometimes hadn`t heard of. I remember receiving and still have a copy of Bandwagonesque by Teenage Fanclub and got to see them very soon after falling in love with this album.

I saw them at a number of festivals but have to admit it`s donkey`s years since I last saw them. The band rock up in Brum tonight to promote their eleventh studio album

`Endless Arcade` released twelve months ago and the first since the departure of co-founder Gerald Love and the addition of Eros Childs from another favourite band of mine, the psychedelic Gorky’s Zygotic Mynci.

The band shuffle on stage and Norman Blake says “sorry we`re about eighteen months late” before sharing a stunning ninety minutes of pure pleasure. The band have eleven albums and try their utmost to share at least one number from each and every one. Tonight, kicks off with a couple of cuts from the latest release with the wonderfully dreamy `Home` and title track `Endless Arcade` before dipping back in time with `About You` and `Start Again` and it`s like they`ve never been away. The set changes most nights and tonight we get to hear the captivating `Did I Say` before Norman picks up a hand held xylophone or glockenspiel and launches into the stunning ` Your Love Is the Place Where I Come From`

My favourite track ` What you do to Me` blasts out and a good friend who came with me tonight, who was as near to the front as comfortable said he witnessed men in their mid-fifties and older jumping up and down before stopping and bemoaning that their knees just wouldn`t take it anymore. That is the power a band like this can stir.

The home stretch has tracks like the reflective `Only With You`, hypnotic `I Don’t Want Control of You` before closing out with the enchanting `The Concept` another of my favourite tracks.

We don`t have very long to wait before the guys Norman Blake, Raymond McGinley, Francis Macdonald, Dave McGowan, and Euros Childs return and share the mesmerising `The Fall`, introspective `I Left a Light On`, the rocky `Can`t feel my Soul` before sending us home with the band`s first single with `Everything Flows`

How can I best sum up tonight?? It was stunning and felt like catching up with old friends that you hadn`t seen for a while and picking up where you left off. I never really understood what the Sister Sledge number “Lost in Music” meant but tonight, witnessing this show, it made perfect sense to me.