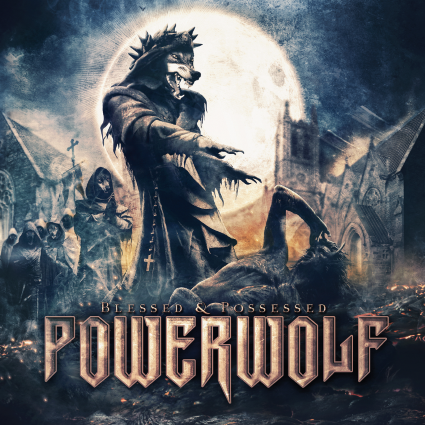 Huge on the continent, Power Metal as a genre, largely never quite translates to mega sales over here (give or take the odd Dragonforce and Sabaton). That perhaps sums up the career of Powerwolf too. A serious big deal in their native Germany and other places in the continent, over here it’s more of a cult.

And whilst album number six “Blessed And Possessed” is unlikely to change that too much, it’s rather good at what it does all the same.

There are some records that reckon there are many ways to skin a cat, there are those that seem to thrive on their eclecticism. Then there are others that you can basically put any song on in any order and know what you are getting. This is one of those. But, there again, it never did AC/DC or Status Quo any harm did it?

So essentially whether you play “Blessed And Possessed” from its title track beginning to its “Let There Be Night” end, the effect is simillar. Double kick drums at breakneck speed, parping keyboards, thunderous guitars and choruses that soar for the skies.

For those that aren’t familiar with the Power Metal – and Powerwolf- formula, think Europe’s “The Final Countdown” turned up to 11, with added classical overtones and done even more po-faced.

From the get-go this is all that and more. “Dead After Dark” screeches and bursts to rock, “Army Of The Night” is wonderfully OTT at a million miles an hour and best of all is “Armata Strigoi” which surveys its surroundings and gets bigger than your average episode of Game Of Thrones” just for grins.

“We Are The Wild” reins things in a touch, and is just a conventional trad metal classic, but as if bored with this along comes “Higher Than Heaven” to out Manowar Manowar. Singer Matthew Greywolf is “raising my sword to heaven,” enough said? And just in case that wasn’t clear enough, there’s a track here called “Christ And Combat” which lays waste to all puny weaklings.

There isn’t even a ballad here, like there should be, but maybe ballads are for wimps. What there is is the fabulous closing “Let There Be Night” which wraps up all the ideas that had previously been attempted here, sticks them in a blender and has a look what comes out the other end.

Look, this won’t be for everyone. And there will be metal fans all over the place who laugh at the sheer bravado here. Powerwolf couldn’t care less what you think. They’ve got their swords and the army is on the march.