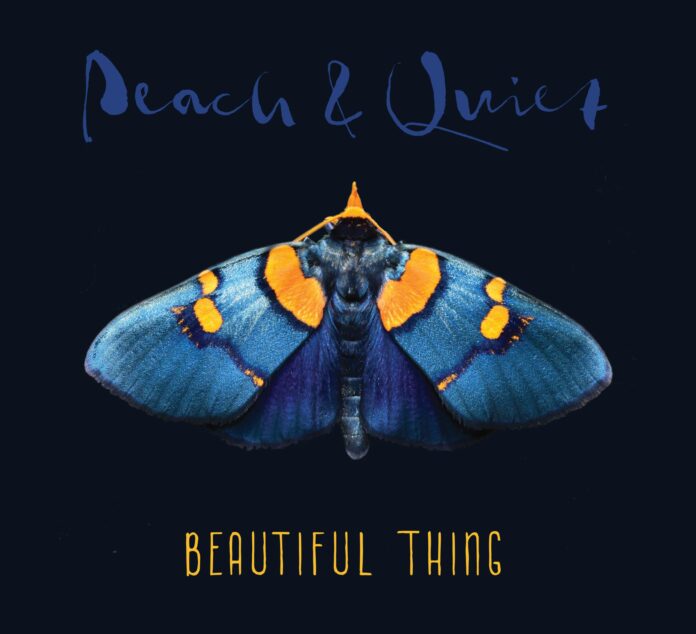 Give or take a few days, it is two years since I reviewed the debut album from Peach And Quiet on the site. The press release that came with the second one, has a quote from my review, “Just Beyond The Shine”, I’d said, “is tasty, juicy and definitely needs shouting about.”

I am reminded at this point of my days as a reporter on a local newspaper where the Sports Editor had a maxim: “Never let your story get in the way of a good pun”, he’d told me, and whilst I never have knowingly refused a pun (good or bad) to this day, it does have to be said that some bands just give you an open goal to kick the ball in. Take “Beautiful Thing”. Is it too on the nose to say that it is just that? No matter, I am going to say it anyway.

It’s odd that Peach And Quiet’s two albums have both come out in January. It’s cold and wet and bleak here, in the English midlands, so I dread to think what it’s like on the Canadian west coast, where Jonny Miller and Heather Read live. The thing is though, that the 12 songs that they’ve created here are just lovely. Like a warm summer breeze on a July day, they are relaxed and happy. It’s incredible how they create this vibe yet again.

The title track has a poetry. “I could define how a cloud feels dancing in the rain”, sings Miller here, with the gorgeous harmony really adding to things. Indeed, even when the mood changes to a desert feel, as it does on the Calexico-tinged “Behind The Sun”, you don’t even notice the harshness of the words to start with, given how smooth the music is.

And that music. It sounds sublime. Some of the finest session players around and Steve Dawson producing is an indication that we are dealing with something special here, and whilst it is, it is full of surprises.  Not least “Calgary Skyline” which has a steel guitar solo of sheer class, and the way the two voices meld together so perfectly, makes it a joy. Or that Miller’s father is a reggae DJ, and the influence is clear on “Horse And Saddle”, which mixes that Jamaican feel with some dirt road Americana.

Read – who’s originally from Wales and her Dad opened for Tom Jones – is a fine singer as well as giving Miller the harmony, “Just Before The Dawn” is a beautiful example of that, almost folk in its fragile intent, it takes the album on yet another meander. Which is totally different to “Oklahoma Or Arkansas” which comes a little after.

That one deals with escape. So does “Pockets Empty” – another that Read sings solo, which comes earlier in the album – only it’s an escape from domestic violence. Whether its from a real place or fictionalised, you don’t like to pry, but the organ flourishes combined with the message make that a highlight.

Heather sings “This Time” too, and that one contains a line: “some bridges need to burn” and you wonder whether the band is a rebirth for the pair, who only met in 2019. That in itself is astonishing given the chemistry they clearly have. “Save Me Tonight” to that end is a love song of the most pure. Miller is on the road and needs redemption in the arms of the woman he loves. The longing here is palpable, and the guitar work is from the top drawer.

A record that often sounds carefree but may not be what it seems also has “Song From A Tree”, which might be from the US West Coast, never mind the Canadian one, and it’s remarkable how this music can resonate thousands of miles away, but it does. “That Is For Sure” a co-write between the pair and the only one that is a conventional duet, also sounds timeless.

That goes for the rest of it too, actually. You do have to look if these are covers (they aren’t) but so classic sounding are they, it is a shock that no one has thought of doing the mournful “When You’re Gone” and the likes before.

On the aforementioned “Song From A Tree” the last lines are these:

There is no that,

There is no there,

There is only this,

There is no you,

There is no me,

There is only us,

There is only we

And that, right there is surely it. No doubt everyone involved in “Beautiful Thing” is gifted, but put them together and united, bonded as one, they are simply glorious.