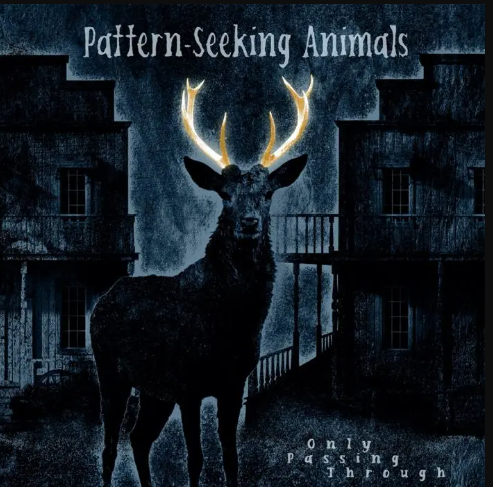 “Prehensile Tales” came out in 2020, and I said something to the affect that although they had little to do with the “other mob”, they were effectively “Spock’s Goatee”.

Now they are back with record number three – showing a Black Star Riders-esque work ethic – and that’s still the case. Let’s be honest, you can’t avoid Spock’s Beard here. Three of them are in the band, one is their collaborator for 20 years, and in Ted Leonard, they have someone who is a brilliant vocalist, but also a distinctive one. No-one, quite, sounds like Ted. It’d be like sticking Brian Johnson in another group, you’d have to think about AC/DC.

“Only Passing Through”, though, is a stunning thing. Beginning with the eastern flavours of “Everdark Mountain”. Gentle, content, there’s some poetry about this. It’s also short. Many of them are, oddly. Pop flavoured almost. “I Can’t Stay Here Anymore”, makes good on it’s “truth be told I’m scared” hook, by adding a sense of foreboding, like it’s the background music for a film almost.

Many bands leave the epic until the end, not PSA. Evidence they do things a little differently comes in the shape of “Time Has A Way” on which John Boegehold enjoys himself on keyboards, there’s a 70s cop show style horn section and some violin, and a Yes style freak out all before anyone says a thing. You’d imagine this would be sensational live, something to truly lose yourself in. On the record it feels like the centrepiece (even though it comes in early) a reminder that there are no rules.

That sentiment just as equally applies to “Rock Paper Scissors”, gentle, lilting acoustics, a folk tinge, and words about “children building bombs, weapons drawn” don’t usually mix, but it looks back wistfully to childhood and has the air of nursery rhyme. It is remarkable how many layers this record has, in truth.

Even the most immediate thing here “Much Ado” has more doublethink than your average Orwell novel. “Today I am gonna sing about nothing”, urnmmmm sings Leonard, over a proper rock song with more darkness than 3am in the morning. “Even nothing is something”, it says. Quite.

The keyboards on the title track are so fragile. “A grand December day, in ways no camera lens could capture” says the first line and the imagery here is so vivid as it ruminates on the fleeting nature of existence. Indeed, as you might expect, given Boegehold’s background this a record that is heavy on the keyboards. He’s gifted at them too, creating the sonics for the wonderful “Said The Stranger”, and the grandiosity of “Here With You With Me”.

There’s a couple of bonus affairs too. Jethro Tull would be proud of “I’m Not Alright”. Actually, this one is too good to be a mere a bonus track, the strident chorus tells you that, and the summer pop of “Just Another Day At The Beach” might initially seem to be the preserve of bands that aren’t as serious about their craft as this. That is until you listen, and realise that it “celebrates” a love that is coming to an end.

It’s something we’ve said more than once in this review, but this is an album that you can listen to in passing (as the title suggests) and it is perfectly lovely if you do, but if you sit with it and absorb it, it is something else entirely, consider that a Public Service Announcement – a PSA if you will.