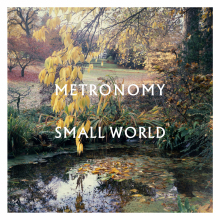 First up are Porij a pop / rock/ dance quartet who studied music at the Royal Northern College of Music in Manchester and their take on `Life And Death`. While it`s a pretty faithful interpretation this four piece stamp their own dreamy and ethereal sound all over it. A quite mesmerising and delightfully captivating listen. `Things Will Be Fine` is given a makeover by PPJ, who are a collaboration between producer Jules Rosset aka Povoa, vocalist Páula, who fronts the Brazilian/French electro-pop band Tampon Tango, and Myd collaborator and Christine & The Queens live member Jerge. It`s a really interesting version where almost differing styles meld together to  create a fascinating almost avant-garde sound.

Cardiff-based DIY punk outfit Panic Shack are up next and deliver a quite questioning, poppy, and spiky take on `Its Good To Be Back` while Nadeem Din Gibisi & Tony Njoku offer up a kind of spoken word and sung presentation of `Loneliness On The Run` over an electronic soundscape.

Bristolian singer songwriter Katy J Pearson shares her interpretation of `Love Factory` which is fairly stripped back and a little remote sounding at times but becomes quite spellbinding the more you play it. `I Lost My Mind` gets a make over by experimental pop musician Jessica Winter and it becomes a more electronic ballad like offering as opposed to the Donovan tinged folk influenced original.

Electronic musician Haich Ber Na`s re-interpretation of `Right On Time` really fleshes the number out and gives it a much more expansive texture and feel. Bolis Pupul is a Belgium-Chinese musician whose version of `Hold Me Tonight` is almost unrecognisable, you didn`t know you`d assume it was something completely unrelated. It has its own off beat sprawling electronic kind of beauty.

The album closes out with Sebastien Tellier, a French singer, songwriter, and multi-instrumentalist who wraps things up with a fairly authentic version of `I Have Seen Enough` but sung in French which gives it a lot more “je ne sais quoi”. A gentle and enthralling number to close out on.

I have to confess that this was a marvellous concept not only did it ensure that I’d revisit Metronomy`s original album to reacquaint myself with their tracks in order to compare them with the covers but it also introduced me to a number of artists that I have to admit I’d never heard of before and will now explore their back catalogues.

It also re-affirmed what a great album this was when first released in February of this year and maybe I didn`t fully appreciate it first time round.