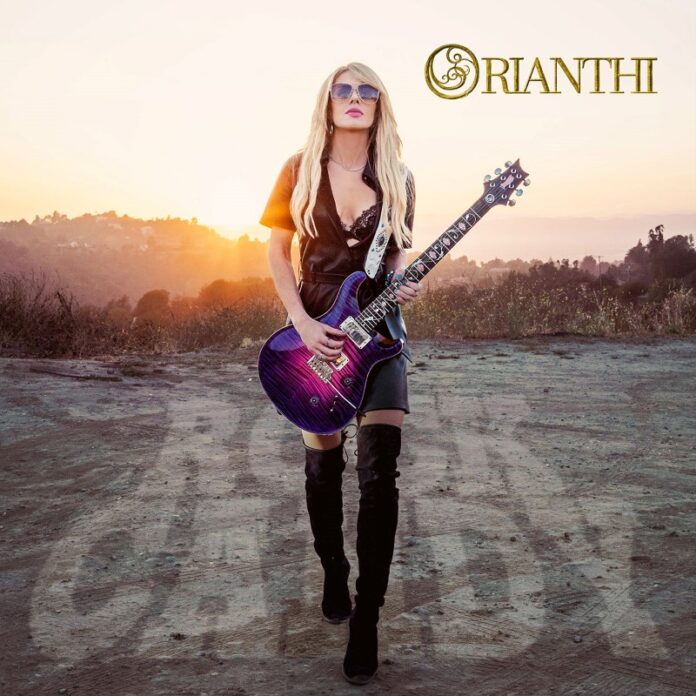 There’s a number of clichés that lazy reviews never try and avoid with Orianthi. I hate clichés. In the case of “Rock Candy” to go down the obvious route would be to do her a tremendous disservice.

So here, really is all that matters: She’s a supremely talented guitarist and “Rock Candy” is a fine, modern rock record.

It’s bookended with the two part “Illuminate” solo. There’s a bit of Satriani in the opening section, while the second part has a more “song” type feel. Now, that’s the proof really, that Orianthi, could if she’d wanted to have done a record like this. And it would have been superb too, no doubt. Its just that she didn’t want to.

Instead, it is an assault on the rock charts. Fans of bands like Shinedown will immediately find a home in the safe, clean groove of “Light It Up”. Lets be honest here, the chorus here? It’s made for a live show, lights going on as its sung and thousands of people with their hands in the air.

“Fire Together” heads off down a Halestorm type trip. Dripping with sex – albeit its not as graphic as Lzzy Hale, but its not that type of album. It’s the type of hard rock album that people get into hard rock by listening to. Like I did with “Slippery When Wet” in 86. There’s nothing wrong with that either.

A kind of duet record too, as Producer Jacob Bunton, who has worked with Mariah Carey, Steven Tyler, Smokey Robinson, Akon and Pop Evil (and I am so out of touch I had to Google Akon – and he’s the biggest of the lot, which probably sums me up). He plays everything that’s not guitar (obviously) and drums. He knows how to write a pop song too. “Where Did Your Heart Go” not only sounds almost exactly like you’d imagine a track like that on an album like this to sound, but you can’t resist it either. No matter how much you might want to.

“Red Light” is something of a contrast. Thundering about in its hook, and its chorus shakes the foundations. Something of an anthem, you’d imagine, for ladies who know they should leave but can’t quite. The solo is turbo-charged with attitude.

One thing this record does exemplify, though, is just how good a guitar player Orianthi is, and how well put together rock can be. “Void” has a groove that is filthy, whispered vocals, then from nowhere, comes a primal urge that recalls the likes of Tyler Bryant. Kyle Cunningham must be owed money by his drums, such is the ferocity he beats them with here.

Credit to for any album that knows its mind like this one does. Just over 30 minutes long. Short, sweet and to the point, Nothing excess. But plenty of light and shade. “Burning” has a bit of Royal Blood about it (and yes, I know they don’t have any lead guitar before anyone tells me) and the one that follows “Living Is Like Dying Without You”, will do. I have only ever liked three ballads in my life (“Every Rose (Has It’s Thorn)”, Bon Jovi’s “This Ain’t Love Song” and “I Remember You” by Skid Row for clarity) but this will mean something to someone with an ounce of romance in their soul, I suppose. “Witches And The Devil” is much better, and if Glenn Hughes was roaring this on a Dead Daises album, it wouldn’t be out of place and “Getting To Me” gives the album one last hard rock masterclass before the instrumental finishes it.

That term “hard rock masterclass” is fair enough too. At some point in the last 70 years or so since Elvis marched into Sun Studios, then you’ve heard loads of records that sound like this. But that pre-supposes that because something has been done before, it can’t be any good now. “Rock Candy” is the answer. It’s a very good hard rock record. One of the better polished US sounding ones of 2022. If anyone still bought albums it’d be top of the charts for weeks. But the Spotify generation will find much to enjoy here.