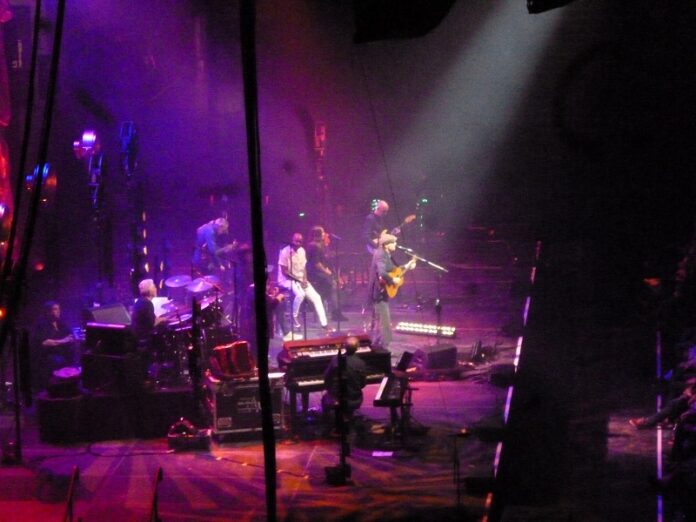 James Taylor has sold over 100 million albums worldwide and has been inducted into both the Rock and Roll and Songwriter’s Hall of Fame. There`s even an ultimate beginners guide to his music on the internet. Tonight`s show had been postponed for some time due to the worldwide epidemic and there`s probably about five thousand expectant souls awaiting his arrival.

There`s little fuss as the singer leads his all-star band onstage and opens with the captivating `Something in the Way She Moves` before `Country Road`. The show is split into two halves with a short interval between and the first half continues with tracks that are well known and some maybe less so with numbers such as `That’s Why I’m Here`, `Walking Man`, `Never Die Young` and `Sweet Baby James` which weas named in honour of his nephew James Richmond Taylor. There`s a friendly rapport with the audience before the singer shares that the death of his friend John Belushi forced him to address his substance abuse problems. The first set was wrapped up with `Copperline` an introspective musing that looks back at Taylor`s childhood, `Long Ago And Far Away` before finishing with a cover of ` Up on the Roof` a song written by his friend Carole King.

As covid struck the signer had just released his twentieth studio album `American Standard` which covers a range of American classic songs and he plays `Teach Me Tonight` from this release as his opening salvo of the second half. `The Frozen Man` which was inspired by a National Geographic story of the discovery of a sailor who had been preserved in ice for hundreds of years is an intensive listen before the upbeat `Bittersweet ` is blasted out. We enjoy some of the most loved Taylor numbers beginning with `Fire and Rain` which I have to say is one of my favourites although it was penned in reaction to the suicide of Suzanne Schnerr, a childhood friend, and the songwriter`s experiences with drug addiction and fame. The dreamy `Carolina in My Mind` is delightful and I read has become an unofficial state anthem for North Carolina and was a reflection on the singer`s homesickness at the time of its composition. The uplifting `Mexico` follows which had Graham Nash and David Crosby providing harmonies when first released before `Shower the People` and `Your Smiling Face` close out the show.

There`s plenty of encouragement from this lively audience and the band return for a three song encore which opens with another Carole King cover `You’ve Got a Friend`, singalong `How Sweet It Is (To Be Loved by You)` written by Marvin Gaye and finally the reflective `Wandering`.

Tonight, was a wonderfully warm, entertaining, and satisfying evening from a septuagenarian who has lost none of his distinctive baritone vocal power or self-deprecative humour. The artist has managed to surround himself with a superbly talented band which included Kate Markowitz, Arnold McCuller and Dorian Holley on vocals , Andrea Zonn on vocals and fiddle, Larry Goldings piano, Michael Landau guitar, Jimmy Johnson bass and Steve Gadd on drums.

Tonight, for me, James Taylor reaffirmed as to why he`s defined as a musical legend.