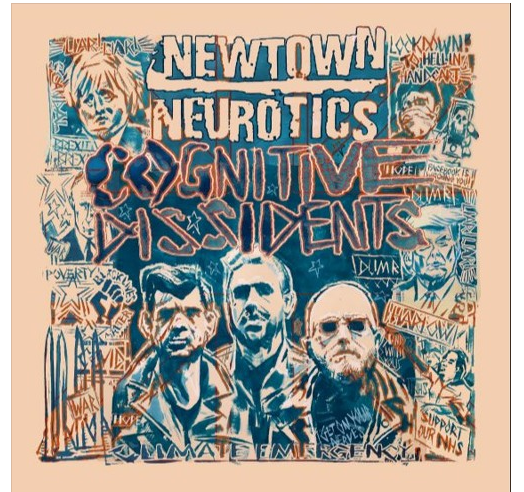 The Newtown Neurotics are an English punk rock group formed in Harlow, Essex and comprise of Steve Drewett (vocals /guitar), Simon Lomond *drums / vocals) and Adam Smith (bass / vocals). The band release their sixth and latest album `Cognitive Dissidents` this month. The articles i`ve read about the band refer to their political stance and social consciousness.

The album opens with `Climate Emergency` which probably needs little explanation as to what it`s about. I felt the number had a kind of Clash like rock n roll swagger about it with shouts of !”Hey!” scattered throughout. A decent introduction for me to the band and a number that strayed with me for some time after it had finished. There`s a more retro punk bluster to `Liar Liar` which may well be a reflection on our current crop of politicians and one in particular that hopes to come back and haunt us.

`Take Your Dirty Hands Off My Town` has a rolling introduction before a newsreel segment is shared and the track then becomes a kind of anthemic reminiscence of growing up in a place and the changes experienced. A song that I found related to where a far few of us grew up and how our own backyards have changed. An interesting listen as we have some brass tinges offered alongside some alluring harmonies.  In `Hope` we have another fairly anthemic piece with some cracking guitar riffs and a optimistic message of strength through unity and harmony.

`Dumb` begins fairly leisurely and grows into a belligerent slow burn that`s a quite introspective condemnation on the dangers of relying on social media outlets for your thought processes. There`s a nigh on spoken word texture about `To Hell In A Handcart` which relates to recognising what`s happening in not only our own country but also the USA and trying to do something about it before it`s too late. I felt that there was a sense of pleading and frustration in the vocal delivery.

`Stand With You` has a lighter feel musically but retains a powerful message of strength in numbers, a kind of punk `There is power in a Union`. A sentiment that is borne out by the Polish Solidarność movement of the eighties. A real call to arms number. The album closes out with `I Get On Your Nerves` which I read the band referred to as a song of rage. It`s a pretty forceful, energetic, and potent piece to close out on and veers off into a slightly dub vibe midway and ends with the Carly Simon “you`re so vein” line repeated at the end for good measure.

I really enjoyed `Cognitive Dissidents` which I have to admit was my introduction to Newtown Neurotics. There`s plenty of catchy and captivating tunes with some subtle political discourse thrown in. The band seem to be on a busy cycle at present with the new album, a tour in support planned for November and a documentary film `Kick Out` due in the new year.

Plenty there to make you neurotic.