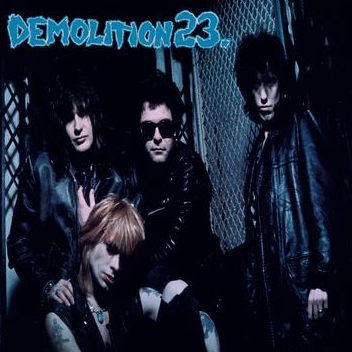 Back in 1994, a magazine came out. It wasn’t Kerrang! And it wasn’t Raw I don’t think, but whichever it was it had a tape on its cover with a couple of tunes that stuck with me. One was Saigon Kick’s “What You Do”. The other was “Nothing’s Alright” by Demolition 23. As they should have, they began a journey. The former led me to bands like Helmet and Prong, the latter was probably the first punk rock album I’d ever loved.

It was only after that I understood that it was Michael Monroe. To us, at the age of 18/19 back then,  Monroe was “Dead, Jail Or Rock N Roll” and to us he was the bloke that played harmonica on “Bad Obsession”.

And criminally, I am now 47 years old and I didn’t know that Little Steven Van Zandt had produced the album until about a week ago.

The reason I was reading about the album was that SVZ has just released it on Wicked Cool (his label) for the first time ever in the US and the first time on vinyl. I hadn’t listened to it properly for 15 years, although a couple of the tunes on it still make Monroe’s live set to this day, and the truth is I’d forgotten how good it was.

“Nothing’s Alright” is genuinely sensational. I was born in 1975. According to the lyrics, “they said there’d be no future for you. Then did too much drugs and made sure it came true”. Watch the government now. Tell me they’re wrong.

Everywhere you look on this, there’s something beautifully sneering. “Hammersmith Palais” reckons “me and the boys are telling lies about things we used to do” and looks with scorn at the world, “The Scum Lives On”, takes every politician on earth to task: spoiler alert, they got worse. Scum isn’t a strong enough word anymore.

It struts, it stomps, it spits, and that’s just “Dysfunctional”, and occasionally it does ragged troubadour balladry. “You Crucified Me” is the best example, perhaps. Five and a half minute tunes aren’t the stock in trade of the album, but when it does this, it proves it could have been whatever it wanted.

Sami Yaffa, from Hanoi Rocks, was on bass and he gives “Same Shit, Different Day” a real anchor. Indeed, the whole band sounds like a gang here, and not one you want to meet down a dark alley. Jay Hening (who died a few years after this) is wonderfully expressive on the guitar here, too, a point “Endangered Species” underlines in bright colours.

“Deadtime Stories” is a special one, you’d imagine. A Co-write with Stiv Bators, and interestingly Dead Boys (the band he fronted) were one of the first ports of call on our discoveries. This tender acoustic track, though wasn’t typical of what we found. “Ain’t Nothing To Do” – a Bators cover earlier in the album, is. The other cover on here “I Wanna Be Loved” has a pub rock, sort of Eddie And The Hotrods thing going on here.

This re-release is rounded out with three demos, and whilst they are fun, “Demolition 23” is a record that stands on its own merits, even 28 years on. It is one of my key beliefs that if something sounds dated now it wasn’t particularly good then, either. This stands as a testament to that. It is probably even better with the benefit of hindsight.