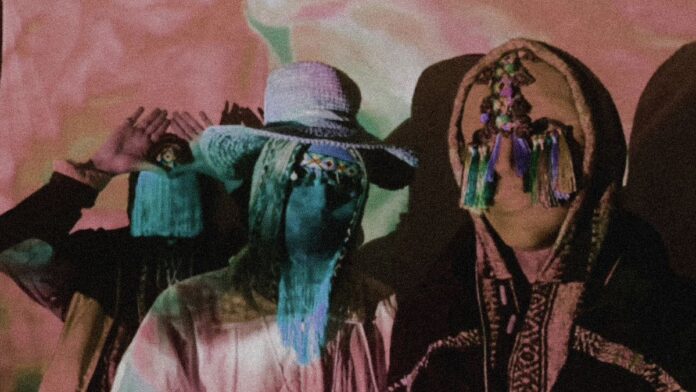 London-based experimental lofi-folk-R&B trio Dwen are pleased to announce that they will release their debut EP, Leoht Farn, on 27th January 2023.

To celebrate the news, the band have released a trippy visualizer for lead single ‘A Ghost In The Weed Garden’ which is released on 19th October 2022, and sees raw, laid-bare vocals with nothing to hide behind, tape-warped guitars, and detuned plucked piano meander over a stripped-back, deep, fuggy rhythm section, weaving between the intimate warm atmospherics of the verses and an enraptured, hooky chorus.

Commenting on the track, Dwen say: “‘A Ghost in The Weed Garden’ is a slow movin’, delicate analog-electronic/folk song about daydreaming, nature, love, sex—the desire for connection and meaning, the relationship of eros as life energy, and our affinity with and attempts at understanding the magic and mysticism of life, death, divinity and our place within it all as humans seemingly apart from, yet deeply a part of, nature.”

Emerging from their East London studio following a number of years of musical obscurity and a series of rhizomatic projects, Dwen continue to cultivate what they started with their only release under the moniker with a brand new five track EP.

The new material is the first from the trio since the release of their 2019 standalone single ‘Tr Pp N’ which drew early attention from tastemakers at The Line of Best Fit, High Snobiety, Sodwee and more.

Aesthetically the project explores lost folk traditions, occult and shamanic practices, and art that we have largely lost touch with in the modern western world. The three-piece draw their influence from the traditions of masquerading and ritual as found in Morris dancing, Green Man, Imbolc, Wilder Mann, Hermetic Ceremonial Magic, as well as the textile art of Damselfrau and DIY/folk costumes from around the world, as captured in the photography of Phyllis Galembo.

Born from the frustration, inertia, and ennui of trying to work together through the pandemic, for the forthcoming new EP the band shelved they had recorded over a near 3 year period in their windowless underground studio, and in the summer of 2021 took refuge in a remote cottage in the British countryside with little equipment, no material, their ceremonial robes and a veritable hoard of high grade hashish.

“Making use of an old piano on site, a couple of guitars, fretless bass and a laptop, our only intention was to start fresh each day writing something new, jamming ideas out quickly and getting them down, to move on without over thinking anything, revisiting or too closely refining our ideas,” explain the band of the process.

“What we had at the end of a week was more material than we had ever finished before and a sense of wonder about how and what we had written. The tracks that make up this release are the handful we felt needed the least revisiting and are presented more or less as they were recorded, with small imperfections, the atmosphere of the room, and sounds of the surrounding nature buried in the takes.”

Thematically the songs are a rendered auto-outpouring of intimate, surreal, and at times tongue-in-cheek lofi-folk-R&B. Merging pop references, accounts of altered states of awareness and cut-up and reimagined writings of various mystics, philosophers and poets. A response to the apparent state of emergence and integration of technology, psychedelics, meditation, magick, ritual, sex and active imagination. Practices that soften the edges between mind-body, inner-outer, I-thou, embodiment and disembodiment.

The result on Leoht Farn is a collection of songs that have an intimate presence, simplicity, and are imaginative playful reflections on the potential awe and wonder embedded in every seemingly ordinary moment of our lives. An invitation to look at ourselves and our relationship with not only our bodies, but the spaces and moments in time our bodies occupy and the micro and macrocosm of nature, the planet and beyond, deep within and deep without.