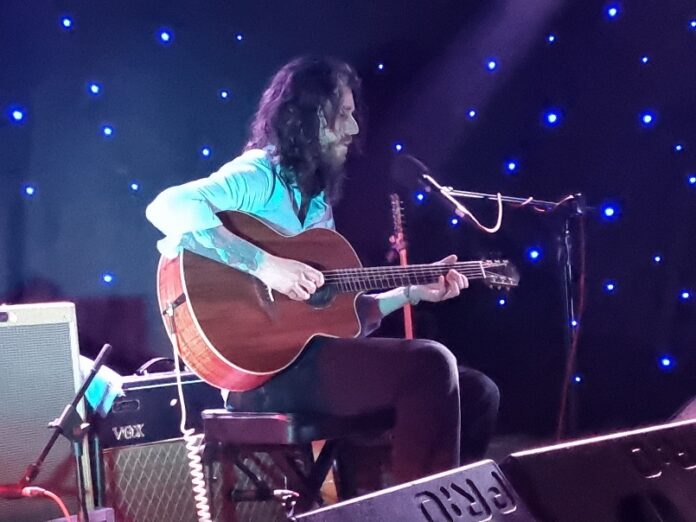 As he does so often tonight Dom Martin makes it easy for us. “My god,” he said. “How good were Brave Rival! It’s rare to get a band that good in a package!” He’s right too, is Dom. Brave Rival are brilliant. I don’t think I’d fully appreciated how good the band were until I saw them live in the summer, and watching them here, it’s clear they have something special. They begin tonight with “What’s Your Name Again?” – they’d ended with it in August – so at least I can get my blushing out of the way early this time and for 50 minutes they do their thing.

And that “thing” is a little bit different to their obvious peers. The stunning – and for once that isn’t hyperbole – dual vocals of Lindsey Bonnick and Chloe Josephine set them apart, and Ed Clarke plays guitar like a hero of yore. “Secrets” and “Guilty Love” (“we’ve got all the angry songs about our ex’s out of the way” smiles Chloe) are blues based rock n roll, but its like nothing else around.

They can groove, like on “Thin Ice” and “Break Me” which they say is their favourite to play, and “Harder To Breathe” sees hair let down all over the place, but its more than just the music with BR. My vantage point for the show means I can see them on the stage and there is no one who has more fun than them, there is no band who enjoys playing more. Maybe that is why they end with “Come Down”. The song is about dealing with missing the high of something you really enjoyed. Like everything that Brave Rival do, it seems to come from the heart. They’ve got everything you need to be very big indeed.

Back to Dom again.

He’s describing how much he loves being on the road, and how the 90 minutes he’s on stage makes everything else worth it. Then he says: “I don’t do this to make money, I don’t even do this because I love it, although I do. I do this because I need to do it….”

Think about that for a second. The need, the urge, the desire. It’s all there tonight.

Rewind to April this year. A record arrived in the MV inbox. Dom Martin had just released it. Called “A Savage Life”, it was one of those records that knock you sideways. The sort of record you listen to and can’t believe it’s as good as you think it is, but it is.

And let’s not be coy about this. It has a flavour of Rory Gallagher, and that’s not glib, or just because he’s from Northern Ireland. It’s because it was that good.

All of which means that tonight, by the canal in deepest Worcestershire, is a show I’d been looking forward to more than usual, so – spoiler alert: Dom Martin is unbelievable here. Jaw-droppingly good.

The first few are intense. He acknowledges this himself, just him, his acoustic and some raw stories about addiction, the death of his father and that savage life in Belfast. In between, there’s “Hell For You,” or “Easy Way Out” and the quite brilliant “Addiction”, written about a friend of his when they were kids.

Honestly, and with all candour, if he’d played 90 minutes of that it would have been one to savour, but he doesn’t. The last two thirds of it see him joined by drummer Laurence McKeown, and bass player Sam Weston and all of a sudden they become a classic power trio.

“The Man From Nowhere” is happy, jaunty, even sounding an early Bob Dylan tune, before there’s a showstopping “Here Comes The River”. In that one Martin walks around the venue and gets people to play his slide guitar. It is a unique piece of participation for sure.

“Maxwell Shuffle” was an important one on “….Life” and it is here too. For a friend of Martin who gave him a helping hand in the past who tragically died, it is an attempt to get as many heroes as possible in to one song. It works wonderfully and this is a band of a true, and rare skill.

The heavier, angrier “Unsatisfied” is delivered with a real feeling, before that “hour and a half that makes it all worth it” ends with “Blues On The Bay”, and you are left to digest and fathom what you have watched.

A few things: first you’ve watched a truly gifted, yet humble artist, one who says “he tries to do the right thing to make up for the person he was”. But also, you are watching someone who is a throwback. He lives on the road, he lives for his art and that shines through.

But you also have to sum it up and one thing I cannot abide, is someone who says “there are no words” to explain something. There are, you just have to find them. So here’s a few. Spellbinding, compelling, majestic, mighty, magnificent.