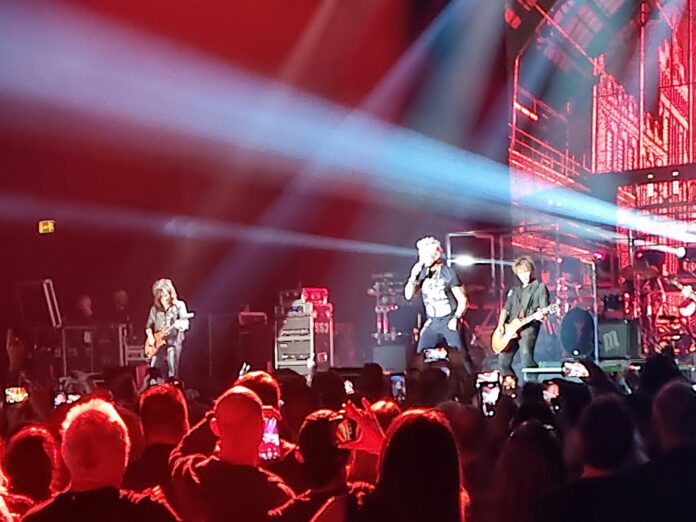 Late replacements for this show, Killing Joke, were always going to be up against it. The third support since the gig was announced, it must be said that tonight’s crowd wouldn’t be their usual audience. Faced with this adversity, Jaz Coleman and the boys, merely get on with the job of being Killing Joke. And they are a hypnotic presence. As “Unspeakable” begins the set, it is clear that the thick riffing of Geordie Walker, as well as the incredible drumming of Paul Ferguson are the drivers of the sound. But it is Coleman who provides the incredible focal point. “Wardance” hits and there is an almost palpable air of tension. A feeling almost of calm is awoken by “Eighties” and “Change” and there is no denying this bands skill. No stranger to these types of stages, indeed the last time I saw them was opening for Mötley Crüe here in 2005, KJ’s is a sound that can fill an arena with ease. the presence of “Loose Cannon” perhaps accurately sums up their set here, and there is a constant whiff of danger throughout. Yet you don’t get to be a band for 40 years, unless you can do this, of course and Killing Joke certainly can. As “Pandemonium” brings it to a conclusion, the faithful have been won over, even if many seem a little nonplussed. It was ever thus with Killing Joke it seems, no hits, yet comfort in an arena and a career into it’s sixth decade. That thing about being Killing Joke? No one performs that role with more relish.

Before he plays “Flesh For Fantasy” as his third song, Billy Idol performs something of a bizarre striptease routine, as he takes his vest off to puts his leather jacket back on, shirtless. The reaction he gets, and let’s not be coy, the body he has, is far beyond what a man who will be 67 at the end of next month would normally expect.

But then he’s not a mere mortal he is Billy Idol, and that 30 seconds rather hides a greater truth: he is a showman, he can still work a crowd with ease, and he knows exactly what he’s doing. And affectively sums up the 90 minutes that he’s on stage. Beginning with Generation X’s “Dancing With Myself” may or may not prove his punk credentials, but it is quite remarkable how fresh these songs sound. Take “Cradle Of Love” for example, released 40 years ago, if it came out tomorrow, you’d buy it.

What is impressive, perhaps more than anything else actually, is that an artist of this vintage and one that to the casual fan who appears so rooted in the last century, is prepared to come here armed with so many new tunes. “The Cage” and last years “The Roadside” EP’s are both mighty things and they know it, too. “The Cage” (“a lockdown anthem” reckons Billy) and “Bitter Taste” – a more personal one about his motorcycle crash – both underline the quality superbly.

The other thing that Idol has done is surround himself with brilliant musicians. Steve Stevens – who later proclaims he is “shitting himself because King Crimson’s Robert Fripp is watching – is as good as it gets, as is Billy Morrison on the other guitar. Stevens gets his slot with a full solo before “Eyes Without A Face” and Idol has another costume change (he’s like the Kylie Minogue of hard rock tonight, honestly) for a singalong “Mony, Mony”. That signals a change of gear, and in many ways the trio of “Running From The Ghost” (a new song dealing with drug addiction) a cover of Gen X’s “One Thousand Punks” and “Blue Highway” are the show in microcosm, there’s something old, something new and something punk. All of this goes into making this gig what it is.

It ends with “Rebel Yell”, but the encore of “Rebel Like Me” again underlines the belief in the new material. They follow this with The Heartbreakers “Born To Lose” and there’s the mega hit. The one that everyone still knows. And look, it’s always a nice day for it, if you will. It was when I was little and watching TOTP and it still is an absolute copper bottomed belter.

It’s something that Idol had said to the audience before he played that one, though that resonates. “Thank you” he said. “Thank you, Birmingham for making my life so fucking great.”

And this show was one of a man who finally appreciates that, perhaps more than he’s ever done.