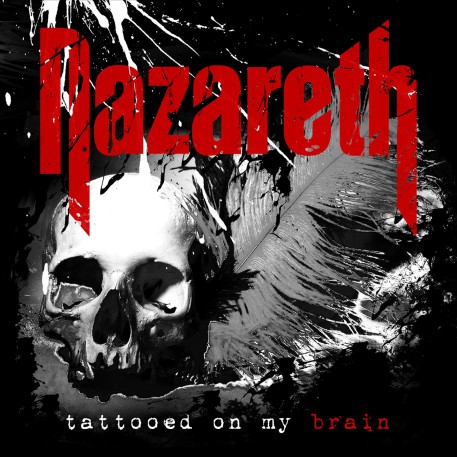 When my nan and grandad got to their 50th year of marriage, the local paper in Stoke on Trent, where they lived, came to their house and took their picture. The photo hangs in the dining room of our home.

Up in Dunfermline, Scotland, they’re clearly made of different stuff. Up there, you celebrate your half century by making a new record – your 24th no less  – and you sound more vibrant than you have in a long time.

More to the point, as far as I know, my nan never sang a song that contained the line: “Although I’ve got to say at least you’re honest, you’ve got to say it’s still a fucking shame.” Which Nazareth have front and centre of the title track here.

The way new singer Carl Sentance  – best known, perhaps, for his work with Don Airey – spits the words too, is like his welcome to the band, plus it is proof, if ever it were needed, that there is nothing remotely middle of the road, not a whiff of the retirement home, about this.

You already knew this, even before the garage rock of the title song, it is right there in the opener too, the strident riff, the huge groove of “Never Dance With The Devil”, indeed Jimmy Murrsion on guitar is at his absolute best here. “State Of Emergency” fair crackles along, and an example of the diversity he has in his work comes in “Rubik’s Romance”, with its almost southern rock air – maybe about the same woman as “Tattooed On My Brain”, it will strike a chord with anyone who finds matters of the heart just a little too taxing to deal with.

“Pole To Pole” sounds like it has no concerns in the world, and is all the better for it. It’s got a nose for trouble and is more than happy to sniff some out, while the bluesy “Push” is even better, and is righteously filthy.

“The Secret Is Out” is another superior slice of hard rock – one with added fists in the air fun – while “Don’t Throw Your Love Away” shows the band, in whatever format and whichever line-up they’ve got, have got an innate gift to write hooks.

“Crazy Molly” sounds like a band half (and maybe less) their age, and likewise “Silent Symphony” is proof that even the deep cuts here have something to offer, and there’s an anger seething its way through “What Goes Around” that suggests a real personal edge to it.

“Change” is the closest “….Brain” gets to mid-paced, albeit with a slamming chorus – perfect in its simplicity – however, “You Call Me” that really surprises. You’d call it a ballad, but it’s one with a touch of menace. It’s stripped down sound is something more akin to a Keith Richards solo album than anything that has gone before.

It is an example of the chances being taken by Nazareth this time around. And that’s why – like the recent album from labelmates Uriah Heep – “Tattooed On My Brain” is essential. Experience doesn’t have to equate to mundane, and it most definitely doesn’t here.