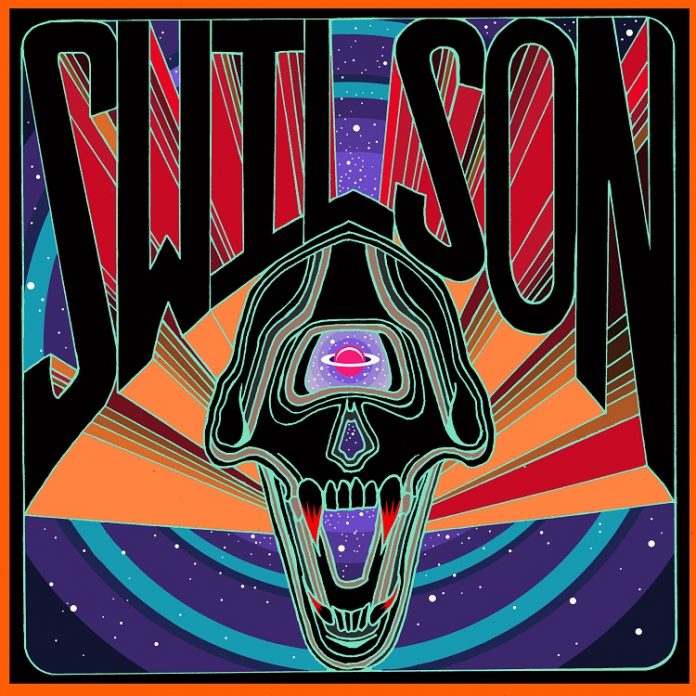 “This is not just an album, it’s a doorway,” says the band.  “Where it goes is entirely up to you, but you should know that there are many passageways, and most of them lead you to your doom.”

The men behind those words, Swilson, are a supergroup made up of a load of bands you’ve never heard of (unless you’re down with the underground in a way I am not) and they’ve come bursting out of NYC like some knife fight between Alice Cooper, Kiss, The Hellacopters and Michael Monroe – and that is just dandy.

“I Like Love” is the essence of rock n roll, bottled and repackaged. “We’re cooler than those creeps down in Washington,” goes one of its lines, and yeah fair do’s that’s about half right. They’re just cooler than anyone. Including you. And me.

The unhinged Jerry Lee Lewis piano is fun as it ushers “Witchtrial Modern Day” (which it helpfully rhymes with “can your sister come out and play….”) disguises a bit of a Misfits style freak out. “Stoned In Blood” sounds like it could and should have been on an early Kiss album (you know, when Kiss were actually good…) and “Cyclops Cobra” is 122 seconds of glee, all wrapped around a guitar solo.

All the 12 songs here – 33 minutes has rarely been so jam packed – are superb, but “Rats With Wings” is one of the best, the catchiest thing since an STI, and nearly as much fun, while “Wizard King” is essentially what “In A Gada Da Vida” would be if it was a punk rock song.

“Axeman Of Your Dreams” manages to sound as menacing as it should – and is the most epic thing here by a country mile – “a Rolex watch on a severed hand….” Is basically poetry, really. Then just when you think this can’t get any better, along comes “Loaded Questions”. Not only is it the best song here – Nicke Andersson is jealous of this, he really is – it is the only song ever in the history of mankind to include the lyrics: “telepathic pyrokinesis – hey baby, what’s your thesis?”

“Witchcraft 2018” is the simple sounds of The Sonics rebooted, “Chase Vampire, CPA” recalls Alice Cooper in his “Dirty Diamonds” era, and “Monkeybrain” is a dirty reminder of why you’ve always loved snotty rock n roll in the first place – and anything with handclaps in the chorus always works, doesn’t it?

“Born In Year Zero” propels itself on the back of a thumping bass, but it is its chorus that you remember – and there isn’t a band better at writing hooks anywhere so far as I can tell.

We began with a quote from the band, so we might as well end with one. “The only way to make an album like this”, they reckon, “is to bring all the Swilsons together, to harness their infernal powers, to fire all the Swilson guns at once and explode into space. And that’s what happened…”

Damn straight, some people are just born to be wild. And this, well, this is a gem.