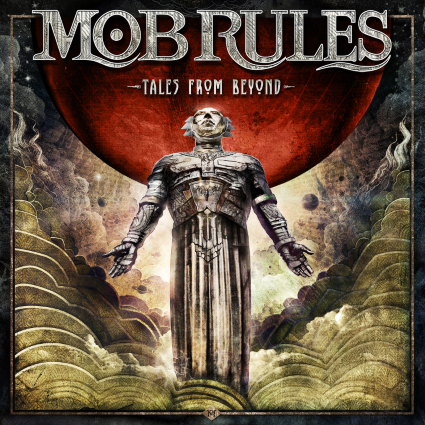 Twenty two years into their career, it still surprises that Mob Rules are called Mob Rules. That is to say that with a name like that you’d bet on them being some kind of Black Sabbath tribute, whereas, about 15 seconds after the start of epic opener “Dykemaster’s Tale” it’s obvious that their allegiances lie elsewhere. Still in the UK, but elsewhere.

If you’ve never heard MR before and liked that little metal band that needs a leg up called Iron Maiden around their “Brave New World” era, then “……Tale” might just have you a little excited. It winds its labyrinthine way around through quiet bits, loud bits, folky bits, a bit of a gallop and the odd massive chorus here and there.

In truth, the whole of “Tales From Beyond” is a confident and classy work. One that is of a band that firstly knows what it’s doing and secondly took its time to do it. In an age where albums are proudly recorded live in the studio, or take a matter of days, instead these boys took themselves into the studio for 10 months and perfected every last second.

The results are pretty stunning, from “Somerled” with its understated Bagpipe driven opening, to another one that Eddie and the Boys would approve of, the mighty “Lies” this is a record that is both complex, but completely accessible, and enjoyable on a visceral level.

Lengthy songs abound – there’s nothing here that’s remotely to be classed as punk rock – but there’s a crunch when there needs to be, as on “On The Edge” and if they are at their best when doing the slow build up’s, as on the magnificent “My Kingdom Come”, then really they excel themselves on occasion here, notably on the incredibly ambitious – and it should be said pretty incredible three part title track, which added together amounts to a 15 minute journey through just about everything that this type of metal has to offer.

The closing track, “Outer Space” is also the shortest, and it’s as if they decided to just let their hair down and get the horns up, whatever the story, the whole album nothing more than great fun throughout.

As Mob Rules are not exactly a new band it’s hard to say exactly what “Tales From Beyond” will do for their career. What we can say for certain is that most bands that want to play a more traditional brand of metal get it wrong by doing it too fast or having growling vocals. Not here, Mob Rules have nailed it.

All that time in the studio was clearly well spent.