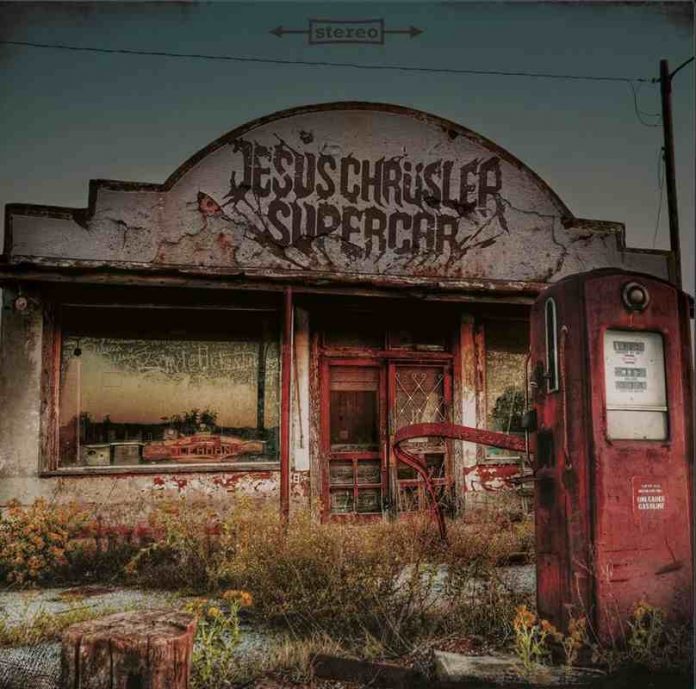 The best band name of the year. What’s the record like?

Imagine a world where Motörhead played with knives, and decided that what they really fancied doing for added destructiveness was to play the first Hellacopters album, “Supershitty To The Max” at ear splitting volume and on constant repeat just because they could.

That world would be be pretty good, right? Granted it might piss off your neighbours but let’s face it you don’t like them anyway, and the music would be good and loud, dammit.

You are in luck, because essentially that’s the world according to the magnificently – no, make that stunningly – monikered Jesus Chrüsler Supercar inhabit, and during the course of “35 Supersonic” they make it their business to keep the throttle fully open, the pedal to metal and they keep firing out them riffs.

Down to brass tacks, and believe us this is a very simple album to enjoy: This is album number two, and the three piece (and one of these days people will do a scientific study into the reasons why three piece bands always rule) by their own admission you don’t need a degree to understand this art. That’s because the collection that begins with “Let It Roll” and ends with “I Gotta Go” (and fair play to them for even signposting the first and and last tracks in such a fashion) is as simple and effective as a head-butt and infinitely more fun.

“…..Supersonic” is as urgent as you like, partly because it only knows one speed, but also because the vocals of Robban Bergeskans are knowingly distorted, giving the impression that he’s screaming at you throughout, Fredrik Karnell (guitars) tosses out solos with all the skill and impatience of Dregen on speed and Nicke Forsberg’s drums back up the front man’s bass, to give “I Can It” the impression of being turbocharged doom, and for goodness sake, if you are going to call a song “For Sale For Satan” then it’s simply got to be as nasty as this one is.

Never quite seeing why you need to spend four minutes crushing people when you can do it in three, songs like “From Hell” boast an impressive growl n roll, somewhere akin to Kvelertak singing in English and “Backfire” beats with a punk rock heart.

“Digging The Grave” manages to be somewhere close to bluesy, and there’s some variation here if you look hard below the distortion and bluster, not that these boys are for turning, as they make clear on the opening line of “Down Down Down” as a voice tells you to “get this and get it straight”.

Indeed, you’d imagine that on any record throughout their career, Jesus Chrüsler Supercar would concoct a brew that tasted rather like this, but what’s wrong with that? They’ve got their sound and they are very good at it, and after all it’s not done ACDC much harm, has it?

A record that just about lives up to the name.