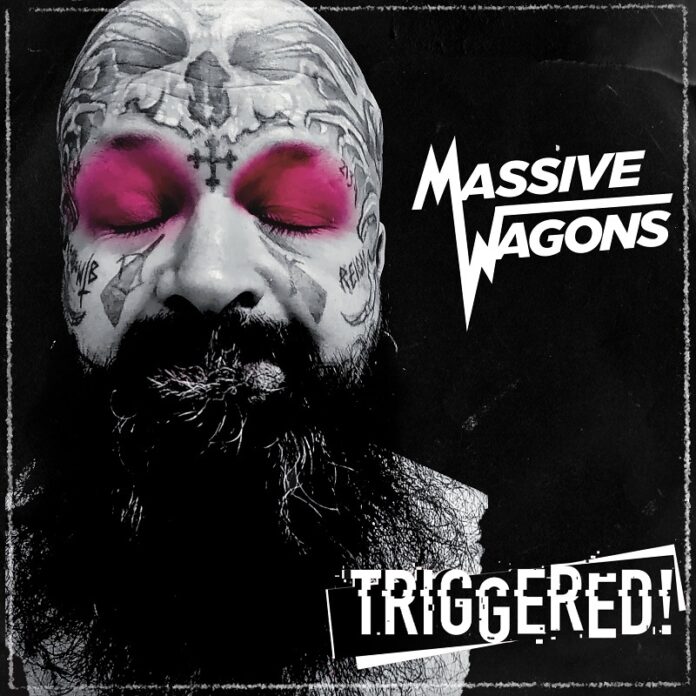 When Massive Wagons were stood in that arena back in the summer of 2019 opening for Lynyrd Skynyrd and Status Quo it felt like a victory for all the bands who are slogging their guts out all over the place. The dreamers with talent, who worked their bollocks off.

That had been evident since 2016, when we’d first seen them. Opening for Ginger Wildheart in Wolverhampton it was clear that they belonged on big stages and moreover they weren’t about to stop until they got there.

Hell, even the pandemic wasn’t going to derail Baz Mills and the boys. They were one of the last shows I’d seen before the world went into mothballs and we all went various forms of crazy. They were also one of the first shows I saw when they began again, which rather sums the hardworking MW up. The only thing that had changed in that time was that they’d moved into the big leagues. I mean, what else what do you call a Top 10 record? “House Of Noise” was that. And it’s follow up is going there too.

Not that “Triggered” is a copy or even an attempt to write “….Noise Part II” as it were. It is unmistakably Massive Wagons, but its Massive Wagons with added anger.

Take opener “Fuck The Haters”, the opener and the anti-bullying anthem, it sounds huge. And its got a chorus you won’t forget. But its raging. Most of them are cut from this cloth.

“Please Stay Calm” is rebellion that I can get on board with, as it happens. “I deliberately drive through amber lights” offers Mills. Yeah. That’ll show them. Oh and by the way, if you hear this and don’t go “ooooh that sounds a bit like Def Leppard” then you may be a better man than me, to be fair.

“Generation Prime” is fabulous. Benji Webbe of Skindred (and the only man who can rival Mills for live energy) is in fine form as he joins them to condemn the modern “I want it now” generation. “no brains, and no education…..” yeah. That’s what 12 years of Tory rule gets you…..

Wildhearts fans need to get to “A. S.S.H.O.L.E” ASAP, the riff is one of theirs and Ginger would appreciate rhyming “lieutenant Commander” with “a bit of a wanker”, before it takes a turn, and the boys take Coronavirus out to the pub and it pisses its jeans. No, me neither. But lets just nod politely?

Everything here – its produced by Chris Clancy of Mutiny Within and Colin “Machine Head” Richardson again like the last one – is short and to the laser guided point. “Skateboard” is three minutes of melody, “Gone Are The Days” is perhaps the most “old school” Massive Wagons, in that they excel at these mid-paced ones.

The title track is a cracker. Basically a long list of things that piss people off for no reason over a classic rock n roll riff, perhaps the best line on it, though is “are you triggered by my band, or just bands with hits.” The humour has always been there and it always will be.

“Guilla” grooves. Tender, too. But they’ll play this live, I am certain of it. They’ll probably do “Germ” too. A mass of incongruousness, it’s on one hand a radio friendly unit shifter with a Thin Lizzy solo, on the other it reasons that “I’d rather bang my dick in broken glass” than give you my time.

It’s one of a number on the final strait of this album where it seems that scores are being settled. “Not A Problem” is another, “Big Time” has “hit radio song” written all over it. Wayward Sons will be looking on enviously, and Mills can’t resist a dig at the bands that haven’t got Wagons’ drive. “You’re still working your day job? I’ll see you around……”

The heaviest moment on the album comes along on “Sawdust” and the anger is ramped up again for “No Friend Of Mine” (although it gets MV bonus points for continuing the Massive Wagons theme of hating Facebook).

That one ends the album too. And it’s not the record that you maybe expected. It’s perhaps the product of 2022. I mean, good lord if you aren’t angry in 2022 then what’s your secret, or it might just be that things needed to be said.

Either way, this is Massive Wagons still being themselves, but a side to them that they’ve not fully revealed before.. And if you’re “Triggered” by that, then you deserve to be offended.