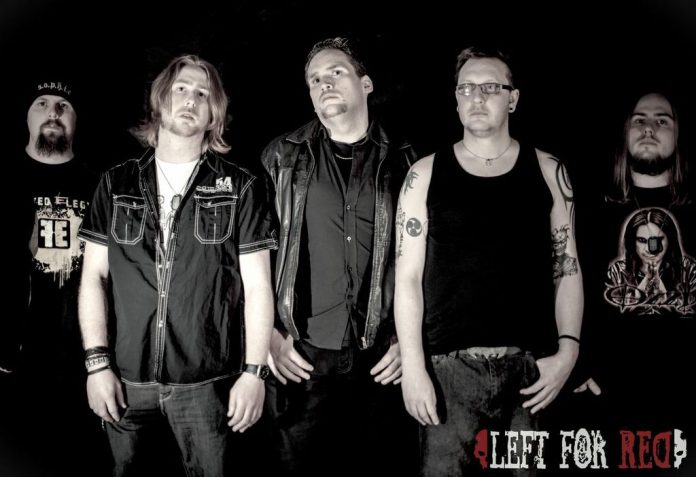 As the Brummie metallers prepare for take off in 2015, we take a look at last year’s Mercy Flight

For a band that has just two EPs out, Left For Red have achieved plenty already. Just have a look at their accomplishments for a minute: they’ve played with a whole host of rock heavyweights including the now defunct Chimaira and the always-with-us Breed 77 and when they aren’t performing opening duties they are selling out decent sized places in their home town with their name at the top of the bill.

The five piece’s greatest accomplishment to date, though, was having their track “Kneel Before You Die” – also the lead song on this stellar three tracker – included TNA wrestling’s “Impact” show. This got them into living rooms in 27 countries around the world, which however you look at it, isn’t a bad days work really….

It’s easy to see why “……Die” won. From it’s military drum beat opening, to its huge great introduction riff, it’s even bigger chorus and it’s downright urgency throughout, this is muscular metal that almost dares you to spill it’s pint without getting your face smashed in.

Second track, “My Obsession” is slower and more considered – and if possible, even more menacing. Singer LC Decoy displaying a fine vocal range, as the band plays music that echoes the likes of Tool and The Deftones.

Completing the trio is the title track. “Mercy Flight” cleverly – and in places surprisingly – twists and turns it’s way through a melodic chorus, verses with just a hint of metal chaos, and a breakdown section at the end, which is just about the heaviest thing on show here: “Dreams are haunting me” yells LC and you almost believe him.

Undoubtedly a band with great potential and brimful of ideas – concepts jostle for position here, sometimes in the same song – Left For Red have that rare ability to sound familiar and yet totally original all at once. The three songs on this record showcase a band that has no bullshit, no excess baggage and is metal stripped down to its barest bones. With a new album set for early 2015, Left For Red can, on this evidence, look forward with great confidence to the a bright future.

Their career is surely set for take off, and that journey will be no mission of mercy.