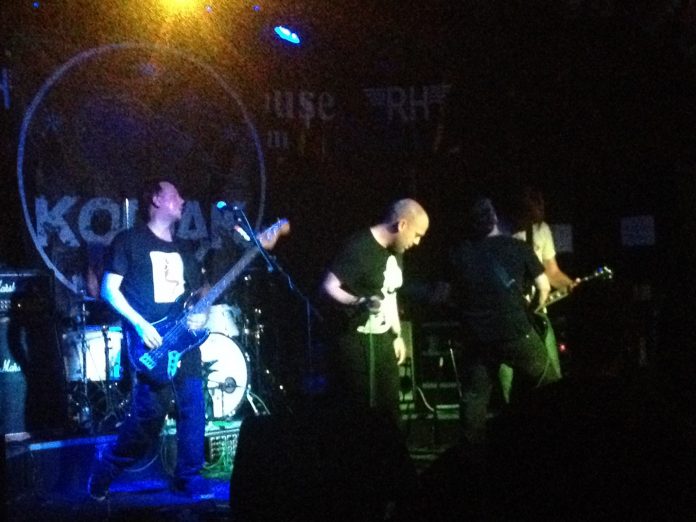 Here so much these days, Aramantus are almost the house band at The Roadhouse. This is their third appearance at the venue in less than than three weeks, but the local youngsters continue to impress, and indeed won a battle of the bands competition in this very room two days ago. Whether it’s the funky new one, or “Enough Is Enough” with it’s Maiden style guitar work, there is a touch of class in the songs here to hint that the band have a bright future. They even choose a different cover this time – where it was Avenged Sevenfold the other week, “Enter Sandman” gets an airing tonight, it’s a brave move to do one of the most recognisable songs ever, but Aramantus, like they always seem to do, pull it off.

HammerJack frontman Sharpy isn’t at his best. Turns out he spent last night at the pleasure of her majesty, but then, as Rose Tattoo once said, nice boys don’t play rock n roll. Actually Rose Tattoo isn’t a bad place to start when dealing with the band, as HammerJack have the AC/DC meets sleaze thing kinda nailed. Guitarist Korush kicks out the jams like Mick Mars circa 1983, while a shirtless Sharpy bellows like a Surrey Bon Scott. “You’ve Got It” adds some Rolling Stones strut to the mix and elsewhere there are traces of The Faces. “Stupid Things” is perhaps apt considering yesterday’s events but throughout HammerJack are good (not so) clean fun.

Guerrilla Monsoon are here by request of tonight’s headliners. The four piece band from Birmingham come from a similar place musically (to these ears anyway) to the likes of Rise Against, with a real grit to their punky but melodic sheen. The approach of having two vocalists is interesting, and they play songs from their new split album (recorded with US band Gameday Regulars) as though their lives depend on it, theirs is a performance of real passion. Technical issues dog the latter part of their set, but this is punk rock, not prog, so they get past it with a smile. Upcoming EP “Big City Plans” has received rapturous reviews (and the lead track is being streamed on Kerrang’s! Website right now) and Guerrilla Monsoon’s career trajectory appears to an upward one. Worth checking out.

Portsmouth mob Kodiac Jack have certainly achieved plenty in their few years together. Touring with Kobra And The Lotus and Paul Gilbert is one thing, having your new album produced by Tesla’s Brian Wheat is quite another. Wheat has been sporting the his KJ shirt at photo-shoots, it’s easy to see why. They come fair old bursting out of the traps tonight, with “Get Out Alive,” almost daring the smallish crowd not to like them. “Brother” the first single from the latest record, “Alhambra,” follows, and shows a different side to the five piece, with it’s almost grunge overtones, it adopts a sort of Soundgarden type crunch. New song “Scars” sounds massive, but has a melodic core and a catchy hook – if this is where the band are heading then count MV in. Another new tune “DOA,” written in the last month, is even better and proves, if nothing else, this is a band who are full of ideas.

They don’t forget “Alhambra,” though, and in next single “More Than This” they have crafted something that is made for radio – indeed if the same stations that champion the likes of Tax The Heat and Blackwolf aren’t all over it, then there’s something hugely wrong. They end with the slow burning “Coming Home” which boasts the type of intentions that are bigger than a Tuesday night in the West Midlands suburbs, and here’s the thing: if Kodiac Jack were American they could be huge, as it is they have to slog to get their music heard, and nights like this, when the numbers watching don’t match the talent onstage, could be the way to pay their dues.

As MV has said before (and we make no apologies for saying it again here) we have a fine crop of very, very good hard rock bands in the UK right now – and make no mistake Kodiac Jack are right up there with the best of them.