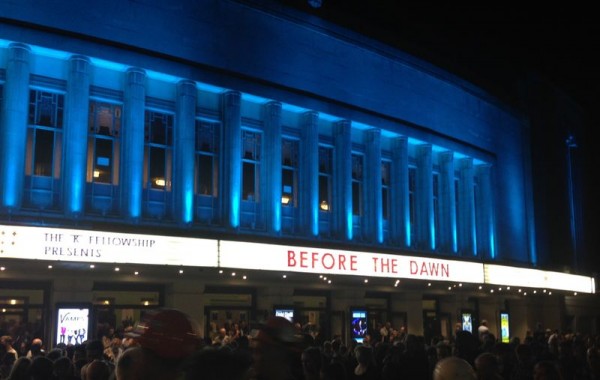 In the first of his regular columns for Maximum Volume Music, 101.8 WCRFM’s Garry Foster shares the excitement of seeing Kate Bush.

After purchasing the tickets almost six months ago, our day had finally arrived. We headed off to the capital for the event of the year, maybe even the decade….upon arriving at the legendary London venue we found an air of real excitement along with a mixture of accents from all over the globe…..this run of shows really had gripped all areas of the world.

I had first been mesmerised by Miss Bush during a Saturday morning showing of BBC’s Swap Shop in the late 70s and still couldn’t believe that I was about to finally see Kate live in concert. On the stroke of 7.45pm her fine band of musicians took to the stage, closely followed by Kate leading out her backing singers in a procession that was greeted by a wall of noise I had rarely witnessed in 34 years of attending concerts up and down the country.

The opening song was the magnificent ‘Lily’ from ‘The Red Shoes’ album which was followed by ‘Hounds Of Love’…….I actually believed the roof was coming off at one point such was the crowds reaction. Any doubts about whether Kate’s voice could handle the live arena after 35 years away from the stage had been quickly put to bed…..each note was hit with precision, some songs even sounded better live than on record.

The rest of the first half of the set was a sheer joy to behold…..’Joanni’, ‘Top Of The City’ ‘Running Up That Hill’ (just spectacular) & 2005’s ‘King Of The Mountain’ paved the way for the whole of ‘The Ninth Wave’ from 1985’s ‘Hounds Of Love’ album…..the concept piece was a mix of set changes, video footage of Kate being stranded at sea in a life jacket and the struggle of the helicopter crew to locate her…..every member of the band, the backing singers and the dancers combined to make this a truly wonderful experience…..and this was just part one of the show.

After a short 20 minute interval Kate & the band returned to perform the whole of the second half of 2005’s ‘Aerial’ album ‘An Endless Sky Of Honey’. Another concept piece which ticked just about every box on my Prog Rock checklist. The mix of sublime musicianship, puppeteers, dancers, more set and costume changes, and a fine array of Bird Heads (yes you read that correctly) during the songs ‘The Architects Dream’ The Painters Link’ ‘Aerial Tal’ ‘Nocturne’ ‘Aerial’ & a brand new song ‘The Tawny Moon’ performed by Kate’s son Bertie sent the crowd into raptures…..after a standing ovation usually reserved for those huge West End Productions which this easily eclipsed the performers left the stage.

Kate returned on her own and performed ‘Among Angels’ at the piano…..a beautiful piece that showed after almost three hours on stage her voice was as strong as ever. The band returned for the final song of the evening ‘Cloudbusting’ which ended with the entire crowd joining in on a deafening sing along

Another lengthy standing ovation followed…..Kate Bush had returned…..and what a return! 22 dates at one legendary venue. If you were there you knew you had witnessed something very, very special…..

Will it happen again? we’re not sure – but what an amazing memory the lucky ticket holders amongst us will take with them if this turns out to be only return to the live arena.

Garry presents the Unchained Rock Show on 101.8 WCRfm at 10om on Thursday nights.