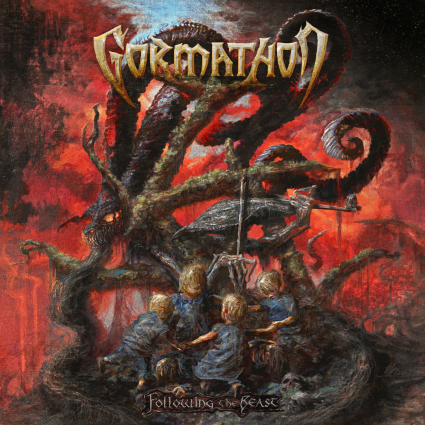 Donnie saw Gormathon at Bloodstock in 2013 and enjoyed the show. Will he feel the same about their new record?

“GORMATHON, the myth, is a hybrid of a fighter and an angel”.

A fan of heavy music knows that Sweden is a country that will supply a decent percentage of your death metal needs.  Already included in your vast library of all things heavy are most likely bands such as At The Gates, Amon Amarth,  Dark Tranquility, Opeth etc etc, the list is endless.  There is, however,  always room for one more and that precious place in your collection might just be reserved for Gormathon.

Their debut album Lens of Guardian introduced the band to the metal masses  in 2010 and since then the band have been building up a steady following that increases with every live show.  Those folk who attend their Bloodstock set last year cannot have failed to be impressed, not only by the length of vocalist Tony Sunnhag’s hair, which in itself is a reason for admiration and respect, but also their towering and thunderous performance back by some future classics of the melodic death genre.

The honour of opening the album falls to “Remedy” which gratefully accepts it’s position and throws a solid, chugging riff pulled straight from the fiery depths of the burning planet Metal.  This one is for the headbanger who adopts  a more rhythmic  intensity to their Exorcist-like head moves.  It’s a very good starter though and, as through the whole album, the balance of bowel-threatening growls and the cleaner melodic refrains are perfectly matched.

The next track picks up the pace.  “Land of the Lost” may already be familiar to followers of the band as it’s been available for some time , as it was released as a single, remember them, back in 2012.  It’s a foot-stomper that showcases the band’s melodical sensibilities aswell and their extreme side.  Definitely the sound of a band “living in the land of the living” as the lyrics advise.

With their template laid down and understood within the first two tracks,  the band keep to the theme throughout the other 10 tracks on offer.  Tracks like “Break The Chains” and “Celestial Warrior” have a hard power-metal feel to them, taking the harsh vocals aside.

As you would expect from a Swedish band the playing is as tight and it gets and props must go to the bassist Kalle Svedåker and drummer Tony Sandberg.  Their understanding allows the dual guitar assualt of Stefan Jonsson and Markus Albertson to lay down riff-after-riff and some beautifully restrained guitar solos.

The highlight of the album is the brilliant “Warlords of Doom”.  A three and a half minute blast of all that’s good about this band.  Every checklist box is ticked from growling vocals to clean melody lines to swirling riffs and “made for the live arena” chants.

The almost-Metallica-ish introduction to “Remember” shows another side to the band but it’s not long before the familiar pace is back in it’s place.  If you were to be critical you could say that the familiarity of the style starts to become a bit wearing over the course of the twelve tracks, but taken individually they still stand up as very good songs.

As yet they don’t quite reach the heights of the more established Swedish, or other acclaimed Scandianvian bands, but the potential is most certainly there and two albums in you get the impression that their magnum opus could very well be upon us sooner rather than later.

Overall, it’s a quality album and there is more than a sense that the real power and force of these tracks will only truly be released in the live arena.  For that you need to see the band live.  I was at the aforementioned show at Bloodstock and with these additional tracks in the canon you would be a fool to miss it.