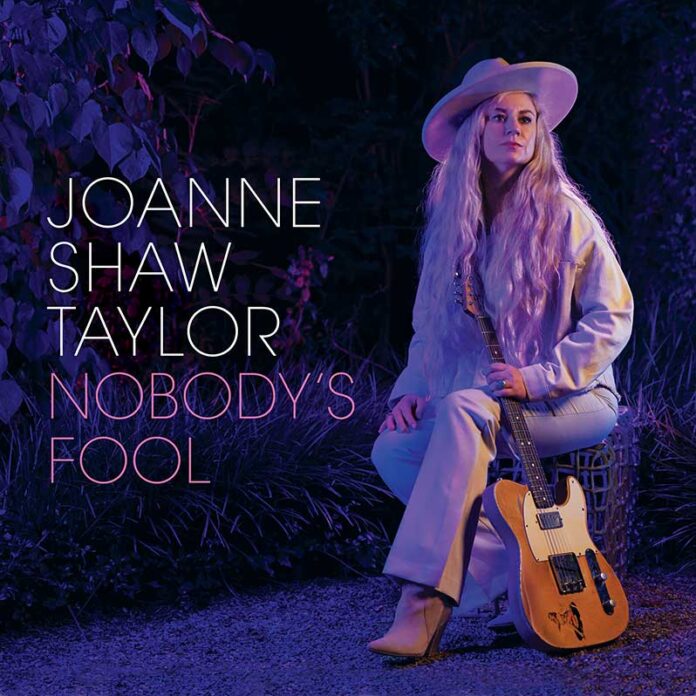 Last year, Joanne Shaw Taylor released an album of blues covers. Handpicked for her by Joe Bonamassa (who has longed championed JST’s talents), and produced by Bonamassa and his creative partner Josh Smith, it was the best album of her career. A fact she underlined with a wonderful live performance of it in the spring.

There needs to be a postscript to that now, because if that was the best thing she’d done, it’s now been usurped by “Nobody’s Fool”.

What is striking about the 11 songs here is how different they sound to anything else she’s done and basically it is the polar opposite to 2021’s offering. A fact she’s acknowledged herself, explaining: “I didn’t have a script for this one; I was not chained to any one particular idea how it must sound”. Allowing herself that creative freedom, she has, along with Bonamassa (who produces here), crafted something like a pick n mix of musical styles.

As a writer on nine of these, you can wager that its amongst her most personal work. Certainly, love appears to be at its heart, right from the rollicking title track all the way through. With a piano at its heart, “…Fool” (the track) has a loose bar room Stones, “Sticky Fingers” era vibe and when her guitar kicks in, you can more or less sense the smile on everyone’s faces.

“Bad Blood” comes from a totally different place. Indeed, it seems hewn from the same desert landscape as someone like Calexico. JST now lives in Arizona (she was born in the place where MV lives and learned guitar at the school I attended) and this sounds like it. “I threw out all your clothes. Maybe you can talk about it with other girls you know…..” is a withering put-down in the words, and its typical of the way she’s opened herself up here.

There’s a lovely laid back pop vibe to “Won’t Be Fooled Again” which sees Bonamassa on guitar, and there’s a more rocking groove to “Just No Getting Over You (Dream Cruise)” when the sax kicks in, it could be Southside Johnny. It’s one for those of us who just won’t let things go, which is probably all of us…..

Of all the personal one’s then I’d say “Fade Away” is right up there. Taylor’s mother died in 2013, and her memory is all through this, and Tina Guo’s gorgeous cello seems to offer hope in the darkness. That they follow it up with “Then There’s You”, a more playful, southern rock tinged stomping thing, is the album in microcosm.

Of course, myriad styles across 45 minutes is only possible if you’re a gifted musician. Taylor is that, but her fabled voice has never sounded more versatile than it does here. Able to handle the light soul of “Runaway” just as much as it is the 80s sounds on the cover of Eurythmics “Missionary Man”. Not only does she make that hers, it also brings things back full circle. It was Eurythmics man Dave Stewart who unearthed JST when she was a teenager and he plays with her on this.

The surprises just keep coming. Nowhere on her back catalogue is there a song like the garage rock infused “Figure It Out”. Carmen Vandenburg from the raw Bones UK joins here and this unlikely pairing works spectacularly.

The record perhaps didn’t have a big ballad on there, one that had a big, screeching blues guitar solo to play it out. “The Leaving Kind” rectifies that. Before it ends with the only other one that JST didn’t write. A Jersey Shore wind is blowing through “New Love”, though and Dylan Altman (who is a songwriter to the Nashville stars, who co-wrote the huge hit “Barefoot Blue Jean Night” makes sure this one is a real highlight. In truth, there are many, everywhere you look.

“New love, you know I wanna feel it, new love, you know I need it” goes the chorus, and it really isn’t too much of a stretch to suggest that in the last couple of years Joanne Shaw Taylor seems to have found her love for creating again. So “Nobody’s Fool” is her best record. But this time, we’ll say best record ….yet.