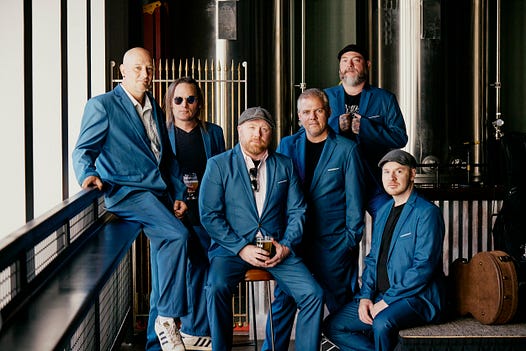 Many bands want to change the world with their debut album. Ruin The Nite just want to change a facial expression. When co-vocalist and bassist Chris Duggan is asked about the expectations for Sound The Alarm, the Boston sextet’s inaugural LP that hits both the streams and shelves on Friday, November 11, his answer is simple: “A smile… I want them to smile when it’s done, and for them to think ‘not bad!'”

Both parts should come relatively easy. Sound The Alarm is a record built on positive vibes and a shared embrace, the result of six friends hunkering down and weathering the elements, from local to global, in creating the album each wanted to make under a collective vision. And a record as layered and textured as this – sailing through genres and styles while briefly docking at the bays of rock, pop, yacht rock, ’70s AM gold, and everything else that kickstarted someone’s dusty old record collection – deserves to be experienced on various formats. On November 11, when Ruin The Nite throw it down at the record release party at Faces Brewing Co. in Malden, Sound The Alarm will be available digitally, as well as on compact disc through Run Bar Records and vinyl pressed by the band themselves.

“I feel like a band isn’t really a band until something is released,” Duggan says. “This kind of unofficially makes us a band. Plus, I really dig this record. Everyone in the band is great at what they do and that comes across on these tracks. But at the same time, the next album will be 10 times better. We know who we are as a band after this record. We found our strengths.”

Though Ruin The Nite have been an active band for several years, emerging from the ashes of former Rock And Roll Rumble winners Goddamn Draculas and a host of other groups that could fill your neighborhood pub several times over, Sound The Alarm is their official declaration. It’s smooth music for rugged times, a call to friendship and fun and all the things that make life worth living – even in times where conditions are less than ideal.

Ruin The Nite threw down the first sonic gauntlet in mid-October with lead single “Sang To Me,” a melodic mountain of a tune that pushes the group’s self-assessment as Boston’s premier “Dad Bod Rock” band to the brink. In addition to appearing on Rum Bar Records’ After School Special Fall 2022 compilation, “Sang To Me” serves a good primer for the record – big memorable chorus, upbeat feel-good nature, and Duggan’s weathered n’ worn vocals contrasting in harmony with the band’s unique horns and keyboard components – but also stands on its own as a hooky little earworm that’s as fun to hear as it is for the band to play.

From there, the storytelling and the songwriting unfolds like chapters in a book, one harmony at a time. And the highlights quickly begin to pile up: The wistful earnestness of “Fire Away,” augmented by Dan McCool on trumpet; the singer-songwriter easy-listening yearning of “Back Of Line;” Nathan Blaser’s blistering saxophone work on the kinetic “Answers”; Matt Sullivan’s endless array of magnetic guitar solos; the pub sing-along appeal of LP opener “Voices”; and every time Duggan and co-vocalist and keyboardist Jeff “Chip” Nicolai switch off on lead vocals. Over Sound The Alarm’s 10 diverse tracks, Ruin The Nite shift from a brash booze- and brass-driven rock dynamo hellbent on crashing the closest bar to revealing themselves as a tender, dependable companion that understands all too well the common fear and paranoia we’re all feeling in 2022.

“I think this record is a good representation of who and what we are,” Duggan admits. “Old rock and roll boys that love many different styles of music. You get a little bit of everything on Sound the Alarm. I feel like one of our strengths is that we can play any style and it would still be ‘us’. This record is diverse and not for the sake of being diverse, it’s just how these tunes got written. We are pretty diverse.”

A lot of Duggan’s lyrics center around “heartbreak with an uplifting direction,” and much of the inspiration came from the struggles of those around him. “I can never write from my own point of view, I think I’m afraid of the vulnerability in that,” he adds. “I always write from someone else’s perspective. Unfortunately over the last few years I’ve had a lot of friends go through some tough times. A bunch of these tunes I wrote for them – without telling them – as a weird kinda healing through osmosis… or something like that.”

Though the lyrics can take on a somber tone, the music certainly does not. Rooted more in the idea of fun than any certain genre or style, Ruin The Nite’s main directive in crafting Sound The Alarm was to simply make the record that came naturally.

“If it’s fun to play then it works for us,” Duggan notes. “I don’t think we ever aimed to sound like anything specific. What comes out is what it is, and what usually comes out stems from fun! Sometimes someone can bring a full idea to the table. Sometimes it’s just playing around a drum beat. Sometimes it’s a silly or stupid phrase that the horns say out loud to remember their lines. I don’t really think one approach would work for us. Again, fun is the key component to this band. It wouldn’t be fun if it was always done the same way every time.”

And the fun involved lends itself to a pretty level collaboration, where each member of the band contributes to each song’s realization. Even outside the writing, the collaboration aspect is a defining characteristic of the Ruin The Nite experience, as the band wrote, recorded, engineered, and mixed it themselves, with Duggan at the helm of his Blue Banshee Recording Studio in Brewster, MA. Drummer Dave Norton, an accomplished tattoo artist, designed all the artwork for the record.

It’s all part of the Ruin The Nite blueprint. Formed by Duggan alongside his former Goddamn Draculas bandmates Nicolai and Norton, the seeds of Ruin The Nite were first planted a few years back. The trio kept playing together, hanging in their practice space and trying new things, building on bits and pieces of the endless list of bands each had been a part of in former rock lives. Quickly, and rather unsurprisingly, things began to gel. “We felt pretty good about how things were going so we talked and decided to start up a new band, with the intent of bringing something different to the table,” says Duggan. “This turned into Ruin the Nite.”

Rounded out by guitarist Sullivan, trumpeter McCool, and saxophonist Blaser (who replaced trombone player Brandon Rainer, who appears on the album), Ruin The Nite is a six-piece project where the goal is to just have fun, hang with friends, and play the music they want to play both on record and on the stage – and do it all on their own terms.

“We all love different styles of music and I think that we do a decent job getting everyones vibes into these songs,” admits Duggan. “It seems we are at our best when we aren’t trying or aiming – and whatever wants to come out, does. We all love music and playing with each other. The initial goal, which I believe is still our goal, is to play music for the sole purpose of enjoying it. Covid was an asshole for a couple years so we couldn’t do much, but now we are looking to write and record tunes that make us happy, play shows with friends and just really enjoy being in a band with good musicians who all really respect each other.”