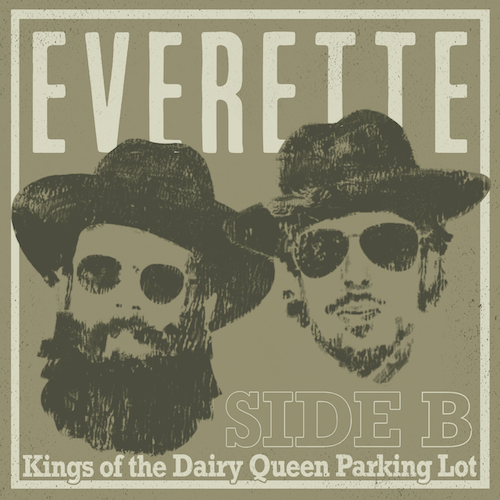 The name alone tells you all you need to know.

“Kings Of The Dairy Queen Parking Lot”. It couldn’t be more middle America if it tried. It conjures up images of those films like Friday Night Lights, where the High School Quarterback leaves the Prom Queen behind to go to college to get his shot at the Big Leagues.

In short, it has nothing to do with the middle of the UK where I am sitting. If there’s any Dairy Queen’s the West Midlands I’ve never seen them, and to be truthful I’ve never really understood the appeal of the NFL.

But, there’s something about this type of Country that you can’t resist. It doesn’t matter whether you’ve heard part one of this, you can put “Side B” on and have it greet you like an old friend, there’s a warm welcome for everyone and a cheery song for us all.

Everette – although they are named after George Clooney’s folk singing character in O Brother, Where Art Thou? – are polished, with an eye on the pop charts as much as the Grand Ole Opry, and “good buddies” – their words – Brent Rupard and Anthony Olympia are mighty fine at what they do, too.

Co-writes on all of these tracks immediately sets them aside from those peers, but you have to say they are the masters of the three minute single. All of these, from the gentle “Run” could be hit singles, and all of them use the maxim of “don’t bore us, get to the chorus” as a starting point.

There’s some genuinely catchy moments here. “Woo Hoo Hoo” is equal parts Cadillac Three and Brothers Osborne and if you think you aren’t going to get swept along with it, you’re mistaken. It’s a choice that you will have taken away from you by the sheer quality of the songwriting.

Take “Gonna Be A Problem”. You know how its going to go. You can see the signposts a mile off, but 45 seconds into it – when the hook hits  – you’re joining in.

Right in the middle of it, there’s perhaps the best example of what they do. “She Got That From Me”. A ballad with a twist, it is superbly done. You know it’s got through when you find yourself singing “she got that fiery temper from the Irish blood on her daddy’s side” at work at 3pm on a Thursday afternoon. That’s the point.

“Wild Woman” is a proper rock n roll hook. Blackberry Smoke fans need to get here for the slide guitar and their playful side is underlined by the clever “Shunk As Drit” (I didn’t get it at first, have a go at singing it……) and as an example of how they write things that get under your skin, then “You Make Me Want One” is your exhibit G. “You say your favourite band is Panic At The Disco, truth is I don’t know who the hell that Is” goes a line. But you know he’s going to buy a ticket. Which, as it is exactly how I’ve ended up with The Happy Monday’s Greatest hits, rather resonated.

The everyman and every woman, everywhere feel is underlined by the last one. From Tinseltown to Timbuktu” they sing, “we’re all just trying to get by” and you know what? They’re right, and something this lovely makes it just a little easier.

Which is why I say no matter where you are, if you have love for Country, you will love this.