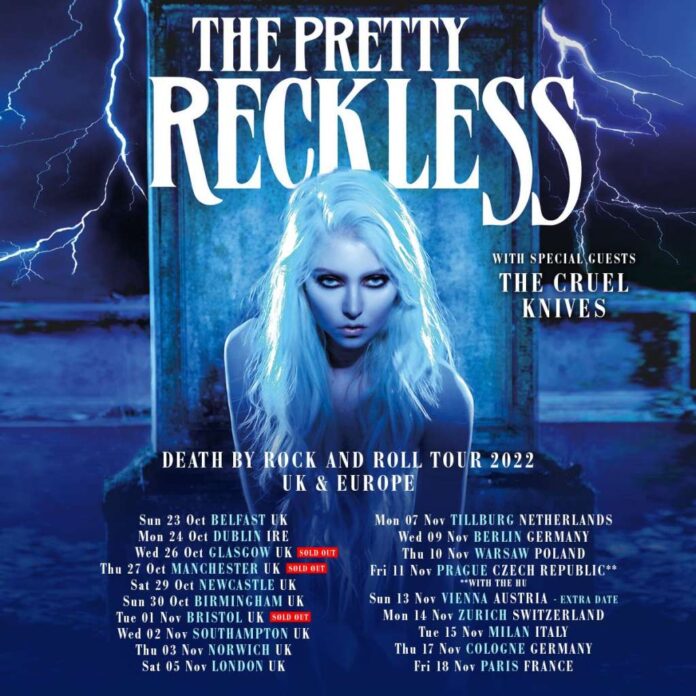 The Pretty Reckless scarcely need an introduction. This four piece rock outfit have become the first female-fronted band to have back-to-back no 1 singles and the first female-fronted act to have seven no 1 singles on the American Billboard Rock Radio chart. They arrive in the UK`s second city on the latter part of a ten date tour of the Uk and Ireland before heading to Europe for a further batch of dates.

Police sirens ring out as the lights dim and the band head into the title track of their last release `Death by Rock and Roll`. It`s a blistering opening as singer Taylor Momsen spins and twirls around the stage screaming out the vocals with its scorching guitar riffs as if it`s a challenge or a marker for what`s to follow. There`s not let up as `Since You’re Gone` is belted out before the pace calms down a touch with the intense `Only Love Can Save Me Now` another cut from the last release.

The thumping `And So It Went` blasts out before Taylor shares that the next number `Make Me Wanna Die` was the first track that the band ever released. As it`s around Halloween the band offer `Sweet Things` and `Broomsticks` which kind of mutates into `Witches Burn` which closes out with another nod to `Broomsticks` as the singer wears a conical crown pointy witches hat .

The bluesy slow burn of `My Medicine` which hints at potential substance or alcohol dalliances and the threatening `My Bones` gives us all a brief respite before the menacing `Going to Hell` screams out and allows the singer`s mezzo-soprano vocal range full reign.

The show closes out with `Heaven Knows` a kind of anthemic call and response number which has some extended guitar riffs before the rolling beat of `Take Me Down` brings the curtain down. After some encouragement, the band return for the final number `Fucked Up World` with a drum solo that may have been better earlier in the set and that`s it.

After the show tonight and the reaction of this sold out audience to the band i`m sure that The Pretty Reckless, Taylor Momsen (vocals), Ben Phillips (guitar), Jamie Perkins (drums) and Mark Damon (bass) will have waved goodbye to these three thousand capacity venues and will be filling arenas and stadiums next time they grace these shores.