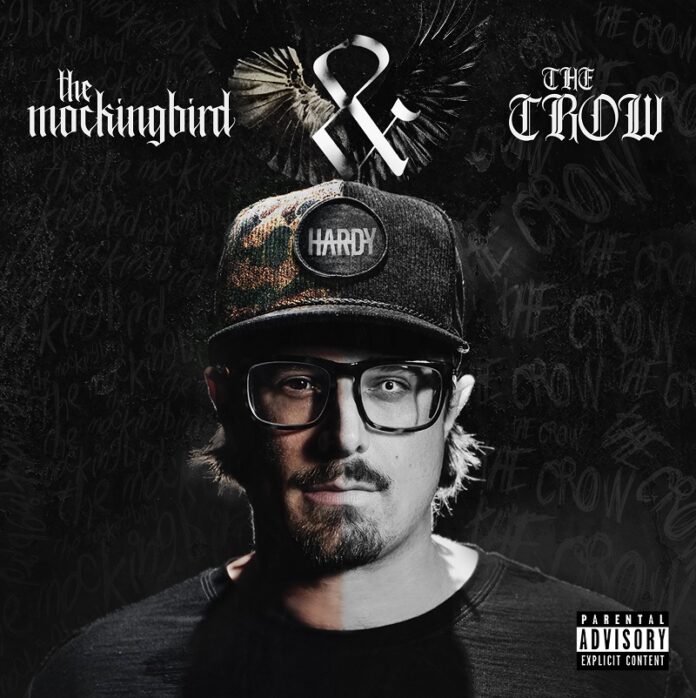 10 years ago or so, Shooter Jennings released a song called “Outlaw You”. A withering attack on the cliched country singers, the chorus went like this: “Hey pretty boy in the baseball hat/You couldn’t hit country with a baseball bat/Country ain’t just about where you’re at/It’s about bein’ true to what’s inside/You say you’re an outlaw with your perfect boots/That you got from your record label’s image group/Sing another man’s song with a big drum loop/Listen, son, you ain’t got a clue/You can’t buy true, tell you what they should do/They should outlaw you”.

Fast forward to 2023. HARDY’s second album has a title track on it that contains this: “Do this, do that/That shirt, this hat/Don’t forget to smile/Kiss the ring once in a while/Don’t say, those words/Put down your finger/Throw in a slow love song or two/Well fuck that, and fuck you”.

On his debut, “The Rock” in 2020, he’d marked himself out as different. Yes, if you like modern country, there’s plenty to like anyway. HARDY isn’t the same. Not at all. Zakk Wylde has played on some of his songs, and there’s moments of proper metal on this. His lyrics too (as that one shows above) are not the usual red dirt road, a fishing pole with your buddies on  a Saturday, then repent your sins on a Sunday thing either.

Except, the cleverness of this is they are that too. “Beer” is enough to suck you in. A letter from the drink to the man, thanking him. It’s different. But it’s country. Likewise “Red” , its got Morgan Wallen on and it does exactly what you think its going to. John Deere’s, blue collars, hunting, fishing, small towns. All of that. All the things we love.

The thing is, though, Hardy is a wonderful songwriter. He’s effectively the house man for Big Loud Records, and his last release was a brilliant compilation with most of their artists that came out in 2021. Another of them, Lainey Wilson, performs a brilliant duet “Wait In The Truck” – and all country songs you’ve heard, you might not have heard one quite like this.

“Drink One For Me” is perfect southern rock. But there’s a twist. Of course there is. “I In Country” is about as conventional as this gets, but “Screen” is much better. Despairing at the modern world where kids would rather play computer games than experience things for themselves, it sets the tone for the rest of the record, which is underpinned by the idea that you should live your life your way and unashamed.

“Happy” does that, while “Here Lies Country Music” explains expertly how much this music means to HARDY, while the title track seems to be a watershed moment. Everything after is harsh, nothing for the Hallmark cards. “Sold Out” with its exclamation: “they’re wall to wall and I still ain’t sold out.” What is interesting  about that one is it how modern it is. Not modern country either, but modern metal. Whether it translates to the country audience, I guess we’ll see.

“Jack” likewise, might be about what you think it is, but its got a grunge flavour that his contemporaries don’t. Indeed, does he have any? Really? The skill of this, though, is however much “Truck Bed” sounds like Puddle Of Mudd (not a phrase I excepted to write this morning) it’s still got that Country flavour.

There’s a lot of the last few that are going to be controversial. “30-06” is one. As an Englishman, the whole guns debate is not something I understand, but the pop punk tinges before the pay off line “what’s one less 30-06 to a redneck?” sticks in your head. That he follows it up with a more urban, “I Ain’t In The Country No More” seems to underline that whilst you can take the boy out of the country, you ain’t taking the country out of the boy.

Best of all though, because it is deliberately disruptive – in that respect is it punk rock? – is “Radio Song” which takes a deliberate swipe at the identikit singers and Jeremy McKinnon from Day To Remember” is genuinely sensational in the middle. Want to imagine Korn playing country? It’s here, brother.

“Kill Shit Till I Die” is another heavy rock tinged homage to guns (he’s got a thing about ‘dead buck’s on my Instagram”) and its going to cause trouble. HARDY doesn’t care. It’s meant to, lets be truthful.  Likewise “Redneck Song”. He’s going to play this live, you know he is. It’s his anthem. It’s the anthem for everyone left behind in the modern world, I guess.

“Keep your in-crowd, I’ll be the outcast” he sang on “Wall To Wall” and HARDY speaks for those people. The “25,000 rednecks with my face on their t-shirt”, but it’s more than that “Mockingbird And The Crow” is the sound of someone who isn’t interested in playing “the game”. HARDY is here to shake things up, a bit like the aforementioned Shooter’s dad did all those years ago. It’s just maybe these days, Outlaw Country isn’t even conventional country at all. It’s this. Whatever this is.