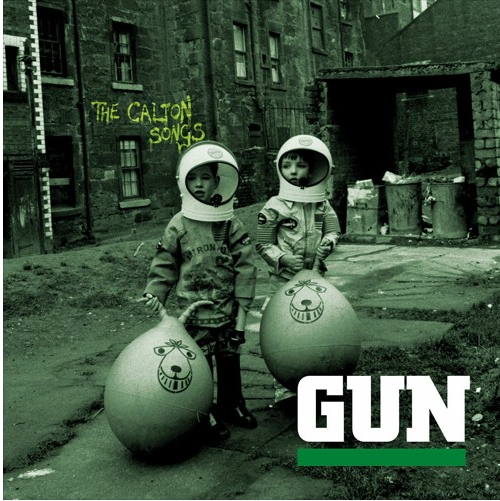 Here’s the latest in our occasional series “Everything Andy Thought He Knew Is Wrong”.

Gun’s “Don’t Say It’s Over”: In the chorus they sing “we could be losing everything….” Not “leaving” as I’ve always thought. And I know I could have read the sleeve on “Swagger” (and I probably did the day it came out) but over the passage of time…..

That’s the beauty of these type of records, they teach you stuff.

And, what, exactly, is “this type of record”? The answer is, honestly, “The Calton Songs” is one for people like me: The fans.

Rewind to 1989. It was the summer, I was in my teens and I heard a song called “Better Days” on the Friday Rock Show. I genuinely believe the next sentence to be true and there’s not a trace of hyperbole in it: The album it came from “Taking On The World” is a lost classic. It put them up there with Thunder, The Almighty, Little Angels and Terrorvison as my favourite British bands of the era.

They’ve released some brilliant songs since. The aforementioned “…..Over” is one. One of my favourite songs ever, since we’re being honest.

And that is what “The Calton Songs” is. A celebration of them. Of a career.

Except this isn’t just a “Best Of”, instead they’ve reworked them acoustically, mostly, but certainly with different arrangements. Some – “Better Days” is one – sort of sound the same, but “….Over” (and this is the last time I’ll mention it, I swear) takes a different life with its strings.

“Crazy You” likewise (from an album that I think deserved more respect) sounds like The Faces now, and its interesting to hear Dante Gizzi singing these songs. He took on the vocals after Toby Jepson left in 2010, and he brings something different.

There’s some here that were perhaps not appreciated properly in their time. “Frantic” might have been from the worst album of their canon, but in isolation the track itself is an indie floorfiller. This one is warm as a summer breeze too.

“Watching The World Go By” dates back 30 years to their second album, and was an obvious candidate for this collection. It doesn’t stray too far from the original either, although the hits do. “Inside Love” is a revelation. Joolz Gizzi is at his best here and the thing sounds like Deacon Blue, “Higher Ground” has some brilliant soul filled backing vocals, and “Money” takes on a blues edge. All are from the top draw.

“Steal Your Fire” is pretty much what Bon Jovi should do instead of the bland shit they’ve knocked out for two decades. Indeed, if Jon and the lads had done it, there’s another Gold Disc in their downstairs bogs. “Taking On The World” on the other hand was, like “….Go By” an acoustic tune anyway, but deny its quality, go on.

“The Calton Songs” (named after the area of Glasgow where the Gizzi’s grew up) finishes with “Word Up”. Now, yeah sound. It’s not their tune. But it is. And they’ve drenched it in horns. You can’t resist it. You won’t resist. You will be singing the thing, like it or not.

And just in case the sucker DJ’s fancy playing a new one, there’s “Backstreet Brothers”. It actually starts this thing off, and is a “proper” Gun song. Thumping. Rocking. Proud. And it’s autobiographical. It must be. “We had the time of our lives”, sings Dante, and adds: “We should have known it wouldn’t last.” It didn’t. Then it did again. And the last ten years has been just fine for them.

They’ve a lot to be proud of too. And most of it is here. It is the long held belief of MV that a good song can translate to acoustic settings pretty easily. There’s nothing here to make me think otherwise.