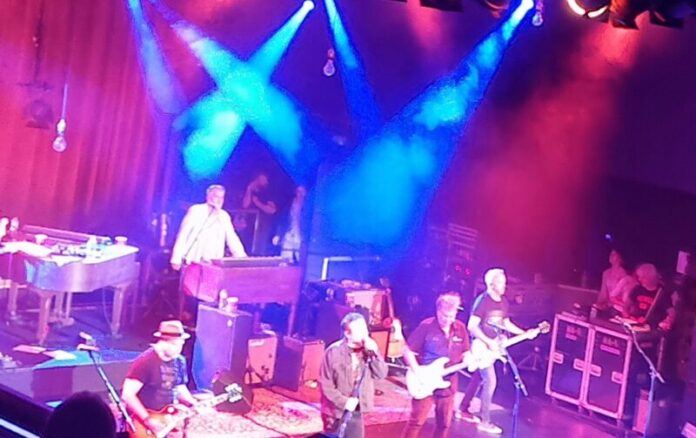 Adam Duritz looks out over a packed Academy this evening and says: “Man, you wonder if after 30 years you’ll be sick of us…..I am glad you’re not, we’re at that stage of our lives where we’re just glad this worked out….”

The Counting Crows singer is joking, of course, but as in all jokes there’s a modicum of truth. Counting Crows will forever be the band of that debut album. The band that were signed to a record deal so lucrative that the music industry dubbed them “Accounting Crows” (allegedly) back in the 90s.

Yet, 28 years on, anytime that they punctuate the set with one of those “August And Everything After” tunes, England’s second city goes mad. These are tracks that have transcended generations.

At this point I’ll make my declaration: One of them, “Mr. Jones”, is my actual favourite song. Not the one I claim is (“Paradise City” by GnR) but the one that really is. From 96-99, that line, “we all want something beautiful,” the other one “staring at the yellow haired girls”. They were a little too close to home. I haven’t seen her for 20 years. That song lives on as a testament to the fact that no one has elucidated those thoughts better than Duritz in that time. No one ever will.

The best thing about Counting Crows, though? How about this. They are a massive rock band. Entirely on their own terms.

There’s nothing corporate about them. If there was they wouldn’t start the show with “Catapult”- an understated thing from the “Recovering The Satellites” record and a little later they wouldn’t halt proceedings so they could do “Start Again” by Teenage Fanclub, for no other reason than you can.

That level of freedom extends to the setlist. No two Counting Crows gigs are the same and even if the order was similar, then watching them live is to watch Duritz deliver the lyrics differently than on the albums.

It gives stuff like “Hard Candy” or even “Mr Jones” a different look. Elsewhere the sprawling “Butterfly In Reverse” (now in the set because Duritz’s girlfriend likes it) is perfect for a rambling band that in another life could have been a jam band to rival Grateful Dead. That they don’t do that is great credit to them, because Dave Bryson or David Immerglück or Charlie Gillingham could do whatever they want. They are content with their own spots in the songs, though and this is a band that is all about the music. There’s nothing flashy anywhere else.

Gillingham is front and centre in “Omaha”, with his Accordion,  while the whole band is right there for “Goodnight Elisabeth” (which is interspersed with Velvet Underground’s “Pale Blue Eyes” and Immerglück cuts loose a solo in “Miami” which has a real skill.

Back in 2021 they released their first new material in seven years, and “The Butter Miracle, Suite One” almost demanded to be played in full. Four tracks blended into one, it is wonderfully done here. “Elevator Boots” and in particular “Bobby And The Rat Kings” stand out. The latter almost becoming something akin to a lost “Born To Run” sessions song.

Old Pro’s that they are, they pick it up for the end of “Rain King” and a brilliant take on “A Long December”. This one officially ends the set, but they’ve all been doing this long enough to do an encore. “Round Here” is wonderfully anthemic too. “Hanginaround” was always fun. I can tell you that the album it came off came out on November 1st 1999 because I bought it on my way home from the first day at the new job which got me away from “Mr Jones” girl. It’s singalong triggers these memories. Great music does. Great music should.

As they often to they end the night with “Holiday In Spain” (“our anthem to you” as Duritz puts it) and at its end, he introduces the band. Afterwards he says something that seems very much to encapsulate the vibe of the night: “If you can be in a band with your friends, playing on stages to thousands of people for 30 years, you must have great friends”.

And no doubt there’s a camaraderie. But it doesn’t half help if you’re in a great band too. Counting Crows unquestionably are that.