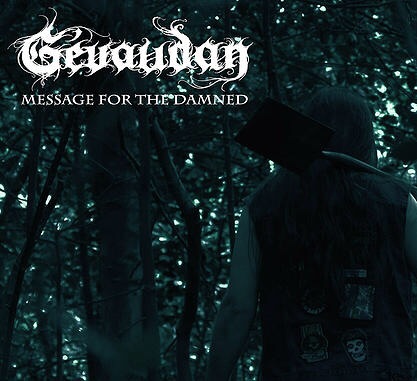 The beast of Gévaudan is said to have terrorised an area of France in the eighteenth century, killing victims by ripping their throats out. Apparently upwards of 100 people met their end at the hand of this terrible beast.

To be honest, aside from it being a rather cool story for a band name, MVM isn’t sure what to do with this information. Apart from the fact that the name is now synonymous with something dark and mystical in an entirely different way.

Bedfordshire based doom four piece Gévaudan posses precious few laughs, but by jimminy, by the end of this weighty and oppressive three tracker – it’s three tracks clock in at over twenty minutes between them –  they sure will get plenty of friends.

It’s straight down to business too, as Adam Pirmohamed let’s out a veritable roar to kick off  “The Cursed Undead” which delves appropriately into a dark, mysterious and downright nasty world of skinless monsters, serpents and all sorts of hideous beings.

“Lament Of The North” is like some glorious alchemy which sees early Orange Goblin jamming with with Electric Wizard, while the closing title track is just wonderful. It’s nine minutes of twists and turns is a journey through something eerie, and the discordant half spoken middle section adds to real feel of tumultuous confusion and chaos, before a mighty ending section positively slams.

Gévaudan list one of their interests on their Facebook page as the power of the riff. Indeed, they apparently came together when bass player Andy Salt and guitarist Bruce Hamilton set to work on the latter’s catalogue of them, and it would be easy to enjoy this on the basis of just “…..Damned” being a fantastic doom record, which it is, but it actually works on so many more levels. Not least of which is Pirmohamed’s stunning vocal performance. The sparing use of the guttural delivery is – if this isn’t a misnomer on an EP this dark – a joy to behold.

Doom honestly doesn’t get a lot better than this. The band named after a deadly wolf is clearly on the hunt for blood.

Previous article
Chris Gets Restless!
Next article
Thrashing Like A Maniac….!!!