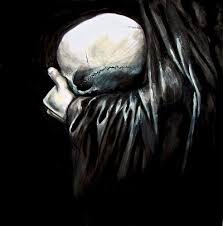 Normally you may be forgiven for thinking that an EP with only two tracks on it is probably not worth reviewing. Were it something less than the Finland’s finest purveyours of occult black metal then you may have a point and although another full length album from the band wouldn’t go a miss, two tracks are better than none.

Funerary Bell were formed in 2007 from the decaying corpse of Invoker of the Shadows. After several months writing a recording demos and generally getting the job of being a new band sorted the EP “The Second Manifestation” was released in 2009.

A few line-up additions were made not long after and recording was under way for their first full-length release “The Coven” which would surface in the spring of 2011. In typical metal fashion more changes to the line-up were made that takes up to the present.

In 2013 the band self-released a limited edition (300) cassette ep gloriously entitled “Horrific TransCosmic Overture”. Last autumn saw some rare live performances before they headed back to the studio for this two-track ep.

Track one is “Afterlife on Earth” and it begins with a rolling drum sound and classic darkened thrash riffing. Once the harsh and uncompromising vocals begin the fury is truly unleashed and the pace and power ramps up. At times it is very melodic and at other times it’s raw as the original early 1990’s sound. Over its near eight minute run time the track takes a few diversions and turns along the way before reuniting with the main structure.

The second track “Eleanor’s Garden” adopts a similar approach as the first. The speed of the track is more akin to Polish legends Behemoth with it’s razor sharp guitar movements and March-like pace.

Lyrically both tracks detail with occult themes, as you would expect, and overall it is a great indication of the things to come from this band.

Long may the search continue…