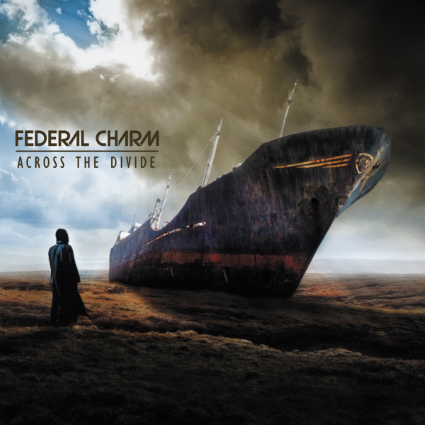 You could probably call Federal Charm an excellent blues band and they’d most probably say “thanks very much” but if you’ve seen the Mancunian mob live then you know that is a rather lazy epithet to attach to them.

They do have bluesy elements to their sound, but rather like another of the young breed, the marvellous The Mentulls, there’s so much more to their sound. In fact, Federal Charm owe as much to the likes of Free and Bad Company as they do to BB King and Robert Johnson.

And so it goes with “Across The Divide” for every tear jerking blues number like “God Forsaken” and the unbelievably good “These Four Walls” – which if Joe Bonamassa put it on his new album would sell millions – there’s something else to leaven the mix.

In a nutshell that’s the joy of “Across The Divide” – it’s like a pick n mix of everything that’s really good and exciting about hard rock. That had been the case since the opening riff of album opener “Master Plan” which comes in swinging like it wants a fight. Right now, and is totally at odds with work like the downright funky “Push.”

Maybe it’s because they four piece have adopted a policy of playing with just about everyone, everywhere (when MVM saw them a few years back it was as support to former Scorpions man Michael Schenker) that they have soaked up so many styles and have made such a wonderfully eclectic record, whatever the reason, the balance is just about right here.

It’s a balance that is perhaps exemplified by the last two songs here. “The Thrill” is a good time rocker, while the closing “Walk Away (Time And Time Again)” is all plaintive, epic and gloriously mournful.

The blues pack is so full in Britain is so crowded that it’s difficult to stand out out from the crowd. Federal Charm have found the best way of all, they just make great rock music and leave the tags to others. They are too busy being very good indeed to care.