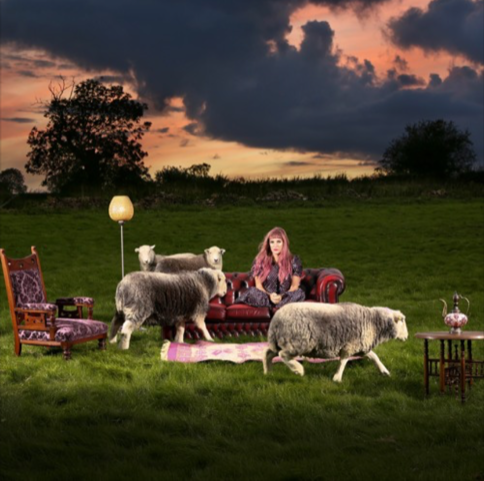 ‘Living Rooms’ tells stories of multiple lives lived and lost in the city, of friendships that mean everything and those characters you never meet again, of transience and loneliness, and of getting by and moving on.

A drum like heartbeat leads us into `Polka Dot` which relates to growing up but still longing for that innocence of youth. The polka dot is frequently seen on children’s clothing, toys, furniture, and ceramics so we gain a kind of dual reference to adolescence. The vocals have that aching sultry delivery that put me in mind of the wonderful Róisín Murphy. We have a fairly eclectic number in `Colours Sounds` which has a kind of orchestrated texture that brought to mind the compositions of Michael Nyman and could easily have slid into a Peter Greenaway film.

`Wired On Caffeine` has a funky, jazzy, big sound with a rolling drum beat and brass snatches while vocals are sprinkled atop and throughout giving it a cinematic vibe. A plucked guitar guides us into `All Or Nothing` written and inspired by a time in the singer`s life changing and a sense of trepidation and hope for what`s to come. The number has some delightful harmonies, grows in volume as it evolves and becomes fairly spiritual as it fades,

`Creatures Of Habit` was written about an old friend who found herself in a difficult dark place on the other side of the world. It`s fairly stripped back initially with piano and vocals before strings drums and backing harmonies join to give it a more edgy sense of the frustration and helplessness that was experienced by the narrator. We have a song about life in Rutland, the smallest county in the UK in `Quintessential England`. A place where the singer lived for a time and felt that she didn`t quite fit in. It`s a multifaceted listen that has a violin played with chopsticks, a sound akin to tapdancing, echoey soundscapes and harmonies along with a repetitive beat at its heart. Compellingly alluring.

`Super Human` is a number inspired by a few 70’s and 80’s movie soundtracks and does have a retro feel. We have occasional bursts of brass on route as a Glitter band like drum rhythm keeps us moving along. I read that it explores an alternate self, which is believed to be distinct from a person’s normal or true original personality. Although `Interstate 10` is a fairly dreamy track it tells of the singer`s harrowing experience of going to the US as a backing singer in her late teens, encountering a violent, alcoholic manager who gambled all the money in Vegas and escaping from this situation during the night.

`Due Respect` is a pretty ethereal offering with an almost despondent cello sound and vocals interspersed throughout its life. The singer has shared that it`s “about a personality clash within a working creative relationship. An experimentation using samples taken from submarines and features an audio illusion known as the ‘Shepard tone’”. The intensity of the number builds in the latter part and has a really appealing rhythmic beat towards the conclusion of the song. There`s a larger than life pop / love song intermingled with some charmingly orchestrated strings and enticing percussion with `Bright As Day`. A composition that allowed us to really appreciate the sheer depth of this artists vocal ability.

The final number on the album is `Taxicabs` a song of love loss, survival, memories, lessons learnt and loneliness being an endless void. It`s another vast and powerful aria with a symphonic or orchestrated string arrangement that doesn`t overwhelm the superb vocals but really complements them. There`s an additional deep and resonating vocal harmony that joins in for the last minute or so that shouldn`t work but really does.

This was a pretty stunning listen and even more so as it`s this artist`s debut long player. The tracks are well written, well thought out and delivered with the help of Johnny Parry, Flow Toulman, Edwin Ireland, Anne-Marie Kirby, Sam Goble, Olivia Holter, Natalie Ellis, Roger Illingworth, Tammy Hine,

I found that `Living Rooms` was a quite breathtakingly beautiful listen at times and i`m sure you will too.

Previous article
BAND OF THE DAY: NETHERLANDS
Next article
TIME TO RETURN TO EUROPE