BAND OF THE DAY: NETHERLANDS 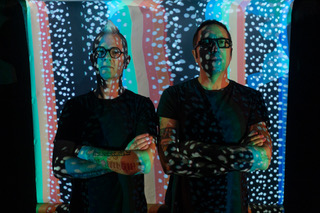 As humanity hurtles chaotically, blindly, and seemingly willingly towards what may well be its last act, Netherlands —  NYC’s hulking, intoxicatingly heavy progressive-sludge band — has returned with an LP which attempts to filter the fury, the glimmers of hope, and untenable intensity of life in the anthropocene into a 10 song narrative whirlwind which sounds unlike anything you’ve ever heard.

SEVERANCE features all the hallmarks of Ellis’ work, including blistering post-shred guitar heroics, primal drumming, and soulful, yet searing caterwauls. But as with every Netherlands release, Ellis has inexplicably found a way to ratchet up the intensity, render the dynamic shifts more extreme, and hone his menacing melange of melody and rhythm into a uniquely weaponised form of rock ‘n’ roll that reaches towards high art.  On first single ‘Omisha’ Timo comments,

“When I was writing this song I’d just re-watched The Seventh Seal (Bergman), and sort of broadly channeled my impressions of the film into the lyrics, which are sung as a kind of matter-of-fact warning from an angel of death. And although not specifically related to the vocal narrative, the name Omisha generally means “Goddess of birth and death” and is of Indian origin. Musically it’s basically just a funky sludge rock killer!”

While Ellis is perpetually working, he’s not one to work with without a grander purpose than loud music for the sake of loud music. In the man’s own words, “SEVERANCE’ suggests a catastrophic separation, explosively brought about in the last 250 years by techno-industrial civilization and the human supremacist worldview, which separates us from the Earth, from each other, and from ourselves. This album is about the urgent need to return to values, traditions, and rituals that restore our connection with the Earth, all of its creatures, and ourselves. It’s about abolishing corporate capitalism, unchecked technological expansion, and halting the unnecessary pillaging of this planet’s creatures and “resources”…about a path forward that integrates modern foundations of fairness, community, compassion, love, and sovereignty for all people, animals, and Earth systems.” An admittedly heavy conceptual weight to lift, SEVERANCE exceptionally cinematic arc is aided by Ellis’ stream-of-conscience prose which lends an earnest, exasperated voice to the outrage so many of us feel in our daily lives as we’re blinded by screens and lulled into complacency by various systems of oppression.

An album exploring topics as heavy as the ones SEVERANCE tackles requires sonics to match. For Ellis — a prolific producer and engineer himself — the skills and peerless engineering sensibilities of tastemaking heavy music producer Kurt Ballou (Converge, High On Fire) and the hallowed walls of Ballou’s God City Studio in Salem, Mass, proved the ideal space to capture the record’s massive sounds. For Ellis, Ballou’s unmatched attention to detail and “comprehensive tuning” of the drum and organic guitar sounds on SEVERANCE proved to be an x-factor in capturing the most monstrous and fully refined Netherlands release to date. The experience of tracking SEVERANCE with Ballou surpassed all of Ellis’ expectations, and reinforced the NETH mastermind’s belief that Ballou is “one of the best and most artfully-minded heavy music producers of his generation.”

SEVERANCE is another chapter in the book of a band that’s consistently released heavy music on its own terms and with its own undeniable personality. There’s a reason contemporary heavy metal luminaries like Joe Duplantier of Gojira and Bill Kelliher of Mastodon count themselves amongst Netherlands’ most biggest fans, and SEVERANCE’S 10 tracks prove Netherlands’ potency once again.