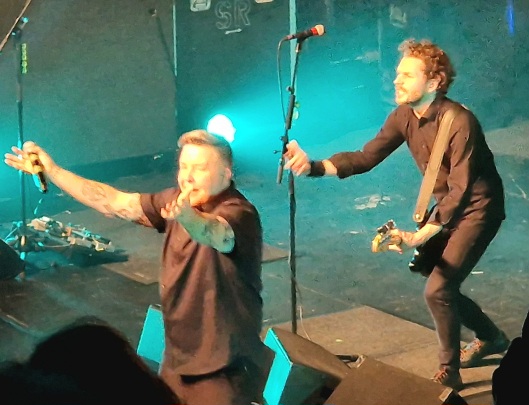 If you could handpick a band to open for Dropkick Murphys then I don’t think we are going too far out on a limb here to say The Rumjacks are the one you’d choose. Their singer Mike Rivkees filled in for Murphy’s Al Barr last year when his mother was first ill. They are excellent too, Rivkees’ flute playing adds a real folk feel to songs like “Hestia”, but the one’s before that are rollicking fun. If you can’t enjoy “One For The Road” or “Fistful Of Roses” for example, then to be frank, you’re at the wrong show. This is a new band, effectively, a world away from their Aussie roots, but the vibe remains the same. They are here to play Celtic Punk with a smile on their face and drink in their hand, and that’s about it. That they finish with “An Irish Pub Song” is not lost on anyone and that’s probably where The Rumjacks are headed straight after this. Get one in at the bar.

Pennywise come from a different place. They are angrier, nastier, there’s no cuddles and perhaps a knuckle duster. Clad in black, like some invading force, the fact they open with “Fight Till You Die” perhaps evidences the struggle here. Jim Lingberg and the lads, though have been doing this a long time and Fletcher Dragge’s riffs are razor sharp. “My Own Country” and the superb “Violence Never Ending” (“this goes out to the scumbag in Monterey Park” spits Dragge) are beatdowns with a quality, while their covers – “Do What You Want” from Bad Religion and “Stand By Me” – inject a singalong feel. Their eponymous anthem, and “Fuck Authority” are all you need to know, seeing as they do things more or less entirely on their own terms. Their sense of togetherness and camaraderie is underlined by singing happy birthday live to drummer Byron McMackin’s son back home and “Bro Hymn”. We’re all in this together, and believe me, you want Pennywise with you, not against you.

Let’s deal with the elephant in the room. Dropkick Murphys are down to just one singer for this tour, while Al Barr is on hiatus looking after his mum (MV sends our best wishes to her) meaning Ken Casey has dropped his bass permanently and is now solely fronting the band. He’s the main songwriter, though and as such, Casey, who never stops, is perfect.

It does, though, give the band a different dynamic, but my goodness, songs like “The Boys Are Back” have lost none of their fun.

You can boil the band down to its essence and its like this: one minute they are doing “Johnny I Hardly Knew Ya” (complete with Thin Lizzy’s “Black Rose”, the next its “Middle Finger” and then its “Two 6’s Upside Down” and sounding like Johnny Cash.

They are brilliant too. They make every show a party and this one has the drinks flowing and the Tricolours flying, “Curse Of The Fallen Soul” has some barroom piano from Tim Brennan, and as if to illuminate their sensitive side, there’s a small acoustic section (mirroring the album they put out last year). “The Last One” is dedicated to the striking workers – “All You Fonies” had earlier seen its words changed to attack Tories – as the band delve deep into their working class roots, “Never Git Drunk Alone” has them joined by Jamie Wyatt, and a reworking of “Skinhead On The MBTA” is a surprising highlight.

After this, they have a race to the finish which includes both “State Of Massachusetts” and their incredible anthem “Kiss Me, I’m Shitfaced” (which unfortunately doesn’t have the usual stage invasion in the post-pandemic age). The encore, which follows is glorious. “Dirty Old Town” is one of the great singalongs, “Shipping Up To Boston” (maybe their best known tune?) “Boys On The Docks” and then, Wyatt is back for the brilliant closer “The Dirty Glass”.

That one is their last song in this country for a while, and this show was originally supposed to be last year before the pandemic scuppered it. It was worth the wait. Any Dropkicks gig would be. Any genre you can find always has a “best” band, and when it comes to Celtic Punk, Dropkick Murphys are without peer.