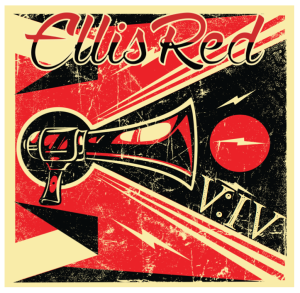 
There was an interview with Ginger Wildheart once, when he was asked how the hell he wrote such catchy songs. His reply was something to the affect that he didn’t know, he didn’t think about it, it just happened.

Whatever “it” is Ellis Red have got it in spades. On this – their debut – they have managed to pack in more hooks than the clothes section at Marks and Sparks.

The opener “Bones And Beauty” bursts out of the speakers as if it’s been waiting all week at work to do something cool at the weekend, while “Trust Your Enemies” is even better. This stone cold belter of a song reminds MVM of the music that was prevalent about a decade ago from bands like Zico Chain and Johnny Panic, and it gets huge bonus points for a “whoa-whoa” chorus that absolutely does not suck.

This feel continues on “My Promise,” which has the Foo’s eye for a mid-paced melody and “Owed To Freedom” pulses in a more modern fashion. “The Beautiful Race” is the type of song that should be played on Radio One, and “Time And Place” has its eyes on Deaf Havana’s prize, as it displays all that band’s gift for widescreen harmony.

A quite superb debut and who knows what Ellis Red will eventually achieve? What is absolutely clear, however, is that on “V:VI” they’ve made a fine start. A real pop-tinged rock gem.