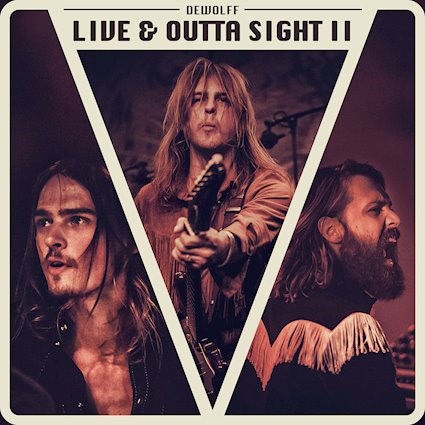 I’m not sure why but up to now, I’ve never heard a DeWolff song. This is surprising as on the face of it DeWolff are exactly my kind of music, aggressive guitar work, extended songs and a 70’s vibe – all the things I like. So I’m starting with a live album, a good chunk of which features songs form their last studio album, Thrust. That album seemed to get universally good reviews and off the back of the songs I’ve heard here, it’s an album I need to buy.

Anyway, it’s the live album that is the subject of this review and the question that needs answering, is, as always, is it any good?

Well the answer to that is a resounding yes though, as with many live albums, it’s not without fault. It features the usual interaction and there are a lot of long songs with length instrumental passages – these may not be everyone’s cup of tea but are to be expected on a true representation of their live set.

‘Big Talk’ opens this album as it did the last and is followed by ‘Sugar Moon’ – a great opening combination but both are overshadowed by ‘Medicine’ – an epic number in both performance and time which features plenty of Jon Lord inspired keyboards. ‘Tombstone Child’ doesn’t let the listener catch breath after the intensity of the preceding track as it blasts out of the speakers, it’s funky riff and guitar licks demonstrating all that’s good in modern rock music and next track ‘California Burning’ is more of the same, complete with a cracking guitar solo.

‘Deceit-Woo’ follows – clocking in at over ten minutes long with length guitar fireworks in the middle followed by the inevitable drum solo, it’s the sort of track that typifies many live albums – you’ll either love it or hate it. ‘Share The Ride’ is more concise and has a Traffic/Stevie Winwood vibe, which firmly roots it in the early 70’s. It also contains an excellent section of guitar solo and keyboard interplay that must have been a highlight of the show.

‘Tired Of Loving You’ is the longest track on the album at 11’44”. It starts off with a real Deep Purple feel with organ giving way to guitar and it’s a full two minutes before the song proper kicks in. It’s basically a heavy blues number with lengthy guitar and keyboard solos within in – it’s a bold statement but to my ears this song sounds like their ‘Dazed & Confused’.

‘Outta Step- III At Ease’ is more straightforward rock song that will appeal to Govt Mule fans and ‘Double Crossing Man’ follows with more of the same. Album closer ‘Love Dimension’ is another long song but of the three on the album, this is the one that I think is the strongest. The 70’s vibe on this one is so strong that I noticed my trousers morphed into flares whilst it was playing. In fact it’s probably the song that showcases Dewolff’s talents the best, as it’s a real melting pot of everyone’s favourite classic rock bands from back in the day.

So a pretty good live album and one that existing Dewolff fans will adore. For me as a newcomer I think I would be better off investing time and money into the studio albums first as its obvious there is much there to explore but as a record of where Dewolff are in their career, consider it job done.