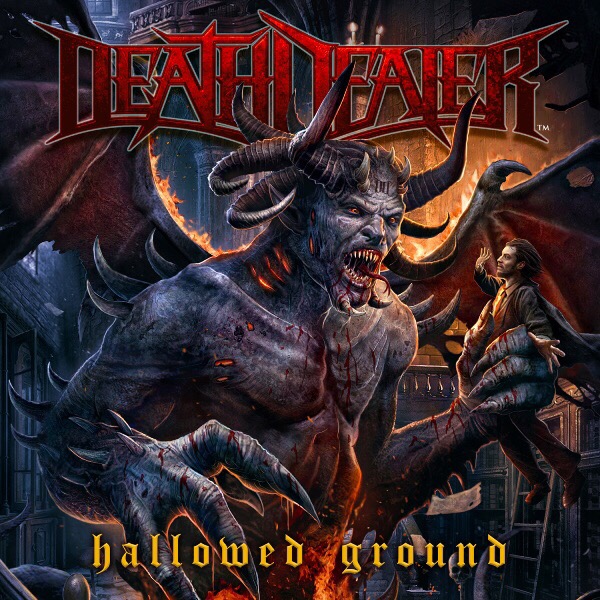 As brash as you want it to be

“It’s hard to argue with the pedigree of a band that includes members that worked with Manowar, the Dictators, Rob Halford, Lizzy Borden, Into Eternity, Cage and Michael Denner and Hank Shermann of Mercyful Fate,” chirrups the DeathDealer bio. It then continues. “And that’s exactly who the members of DeathDealer were previously associated with – vocalist Sean Peck, guitarists Ross the Boss and Stu Marshall, bassist Mike Davis, and drummer Steve Bolognese.”

When even the website is as boastful as that, then what on earth is the record like? Happily “Hallowed Ground”, ladies and gents is an absolute stormer.

It should be noted, of course, that the key name here is Ross “the Boss,” once of Manowar and all round Power Metal legend, and nothing involving that bloke is gonna die wondering, is it? And actually, with “Hallowed Ground” its best to start at – nearly – the end. There’s a track, tucked away at the back of the record, called “Skull And Crossbones” which – after racing out of the blocks and invading anywhere it chooses to – says this: “for gold and glory/ we rape and we pillage and fight/ our songs tell a story/ we’re guided by stars in the night.”

Ostensibly the track is about Pirates (no, really) but everyone here knows that this is how the band themselves see their quest for Heavy. Metal. This one of those absolutely pompous, absolutely po-faced and entirely ludicrous records about Heavy Metal and it’s glories.

About three quarters of an hour before the shanty, we’ve had the band depicted as Cowboys in the brilliant “Gunslinger,” we’ve had the dead summoned up on the wonderfully horrific “Seance” and we’ve had their manifesto on the galloping, breakneck “I Am The Revolution.”

Nothing divides opinion in the heavy metal world quite as much as Power Metal. There are those who don’t, shall we say, “get it” and would fail to see the downright majesty (in all senses of that word) here. The point to a song like “K.I.L.L” (sample chorus here: “K.I.L.L. K is for for killing, I for an eye, two Ls in hell where I’ll see you tonight”) is there’s absolutely no point at all, beyond it being a glorious way to horns up anthem.

And you suspect that DeathDealer couldn’t give a studded belt and a pair of leather trousers whether non-believers, as you also suspect they’d refer to the unconvinced, like it or not. In fact they probably would lay waste to puny weaklings anyway.

As the band put it themselves on the spoken word intro to “Plan Of Attack:” “Stop wait, we need a plan of attack!” The answer comes back as if it’s the most obvious thing in the world. “I have a plan. Attack! Attack! Attack!”

To be honest you’d best surrender.