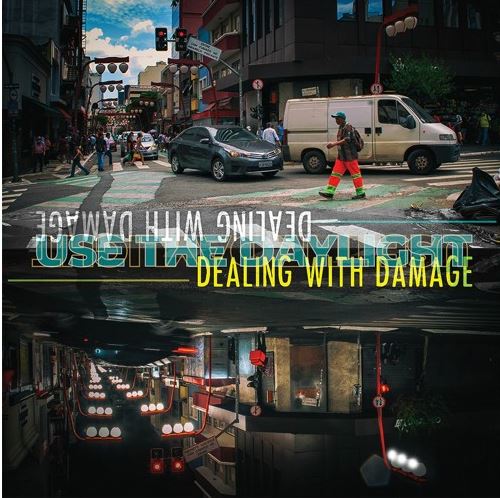 Dealing With Damage are a post-punk band from London who comprise of Andy Myers (guitar and vocals), Paul Grier ( bass), Ed Wenn (vocals and guitar) and James Sherry (drums). The band members have served their time in various bands such as Sink, Done Lying Down, K-Line and Jerry Built to name but a few. They released their debut album ‘Ask The Questions’ in 2020 but due to the worldwide pandemic the band were unable to road test this release in a live setting. Nevertheless, undeterred the group utilised this downtime creatively and the result is their latest album ‘Use The Daylight’ which is unleashed on the world this month.

We are led gently into the album with the brief `Sunrise` a fairly reflective and meditative rumination on life, how we are governed and possibly encouraging us to resist it`s destructive path. The number is shared subtly with a kind of Americana tinged musical flavour curtesy of Steve Cox`s organ tinges, John Ruscoe`s pedal steel hues and Carol Hodge`s balancing vocals and harmonies. The anti is certainly upped on `Walking Backwards Into The Future` which is an enraged but unvitriolic reverie on how life passes you by if you allow it to, so grasp the nettle before it`s too late. It has a punk come post-punk guitar and rolling drum driven texture which sets a platform for the resentment shared.

`Instrument` has a kind of post punk Pixies coloured sensibility about it but with a bit of bite and more thoughtful lyrical content. The track almost takes a time out midway before resuming its journey with a couple of lines in “I won’t give up on you; it’s unconditional, don’t you give up on love; on life” where each word is nearly spat out to ensure their importance is fully understood. I read later that it was inspired by Ed `s experiences bringing up his autistic son and wanting to protect him. There`s a hundred mile an hour punk like assault dished up on `Bigots vs The Mad Professor` which addresses the rise of prejudice in our country and in general. At the end of the number somebody says, “That felt good” and indeed it did .

I really loved `Rinse Repeat Rinse` maybe because it reminded me of one of my favourite bands Hüsker Dü and brought me back to my mid-twenties when life seemed so simple. It seems to relate to continuing to replicate the same mistakes that have sent this country to hell in a handcart. Again, I read afterwards that Trump with all his disruptive behaviour and similar copycat leaders instigated the lyrical content. We have a pretty soulful vibe with `Keep Moving` which sampled some beats from James’s dad John`s old band, The Bunch, who were active in the late 60s which i`m sure was pretty emotive for all. Sohrab Habibion and Michael Jaworski from New York City indie rock band Savak and friends of the band added some acoustic guitar, harmonies, keyboards, and guitar feedback.

`We Make Bombs To Feel Safe` isn`t a protest song as such but more a frustrated observation or examination on how we allow our planet to be abused and ultimately destroyed and our government and leaders to screw us over and just put up with it. It`s not preachy but conveys it`s message over an edgy rock and at times grunge like texture with dual vocals as if to emphasise and drive the point home.  We have in `Letter From Yootha` a number with menopause-related lyrics co-written with Yootha Today`s Clare Dowse, Estelle Howes and Dawn Smith who also supplied vocals along with

Cil Wong from Dinosaur Skull who took up the midsection. Kent Nielsen added vocals and a Radio DJ intro in Danish. The track itself, to me, had a kind of Rage Against the Machine and Ramones on acid perception about it.

`First, They Ignore You` is a lockdown diary song that is in essence a call to arms to keep fighting when all looks bleak or overwhelming. It opens quietly before building with crashing guitar riffs and much more pensive chords and organ tones supplied once again by Steve Cox. There`s anger, frustration and defiance towards the end shared through the vocal delivery. We enjoy a brief mash up of sounds in `Liberez Wayne Kramer` which comprises random snippets from a lightly tapped drum rim, phone, fuzzy noises off the car radio to some folk songs that a Ukrainian carpenter was playing and violin swathes from John Hannon. Shades of Alabama 3 meets Big Audio Dynamite while liberating the lead guitarist and founder member of MC5, you work it out.

`John’s Gone` is a kind of eulogy to the band`s producer and friend John Hannon, who suddenly passed away in 2021, having already recorded half of the material on this release with Pat Collier.

A fitting tribute and played in a similar incendiary style to The Rut`s `Babylon`s Burning`. I didn`t know the fella but i`m sure he`d have a wry smile listening to the lyrics. We have another fairly thoughtful composition on `Seek Shelter` where we are encouraged to gain knowledge through whatever means available and is sung against a fairly mesmeric post-punk soundscape.

`Write It Down` appears to ruminate on influences that are all around us and are worth noting. To me it had a Buzzcock`s `What Do I Get ?` feel but much heavier if that makes sense. James Kermack and Graeme Bird supply the voices on the fleeting `May I Help You?` segment that is an oblique reference to The Beatles meeting the philosopher Betrand Russell at his London home which led to their politicisation and opposition to the Vietnam War.

The album closes with `Sunset` which is somewhat the yang of the ying opening song `Sunrise` possibly. They both seemed to flank the beginning and ends of this album. A contemplative number that expresses thoughts of the day gone by but it may well be a metaphor for the sunset or latter years of our lives.

`Use The Daylight` is a wonderfully rich and varied listen which is well thought out and presented.

It has a tinge of sadness as the band`s friend passed away while recording but maybe that`s what drove some of it. The songs do force you to maybe stop and reflect a little at times but the overall feel I gained was of the Latin aphorism of  `carpe diem` or to seize the day, to urge someone to make the most of the present time and give little thought to the future. A view that life is a journey to be lived and not a problem to be solved.

Advice worth listening to as is this album.