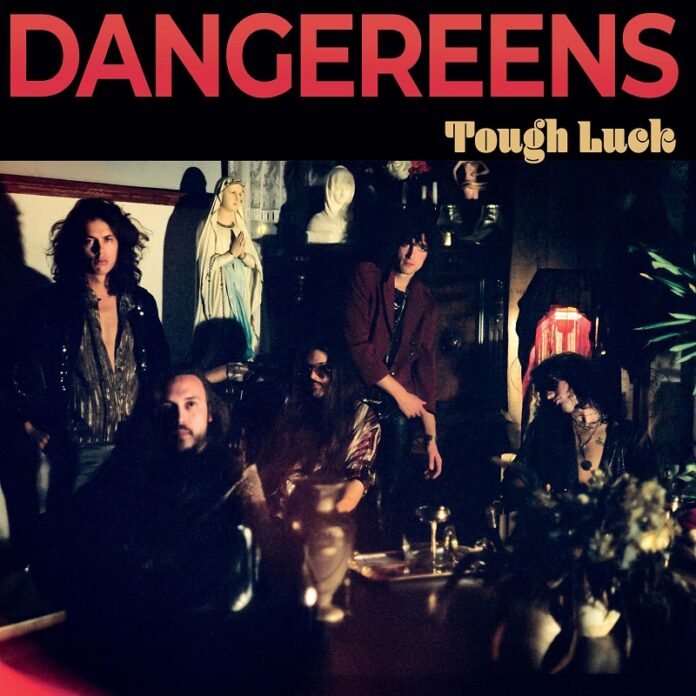 Right look, it’s Monday when I wrote this. We are about to enter “festive season” (the hardest time of the year to dislike people and social occasions), I’ve been to work today and I’ve got to go again tomorrow. Basically, the point I am making here, is today can get stuffed. It can do one.

Well, hope is at hand. And it comes in the form of five blokes from Montreal, Canada, one of whom is called Hugo and clad in the flounciest shirt in the history of flounciness. Across the 14 songs that make up “Tough Luck” they manage to bottle rock n roll, and basically cheer everyone up. That’s it, really.

But come on, you and me both know how this works, so I am going to spend 600 words explaining why this is the case. Your choice. Read it for the next few minutes, or do not pass go and instead head to whatever streaming service you like (it’s in almost full on Bandcamp) and listen to it instead.

Ok, for those that have stayed, “Streets Of Doom” proves that never has a track been so badly named. This is full of hope, boogie, vigour. Hugo (his surname is Chartrand and he writes all this fandango) is the type of bloke who duck walks around his kitchen to get his corn flakes so happy is he to be alive. Oh, he’s a damn good songwriter too.

“Thieves” is the sort of thing that Diamond Dogs used to do. The spirit of the Stones mixed with the punk of The Clash and a horn section like it’s the Jersey Shore. Why? I don’t know, just cos a horn section makes everything better I guess?

Along the way there’s stops at country (“Hearse Driving Blonde”) and a song (“Unlucky In Love”) that is so glammed up that it might be a T-Rex number (hell, this might be a cover, do you think I’ve be arsed to check?! Who cares!)

Everywhere you look there’s brilliance. “Microwave Boogie” is everything that’s ever been good in two minutes 48 seconds, “12 Below Zero” has the pop sensibilities of Squeeze, “Love Jive” takes the Allman Brothers guitars and runs off (MV faves The Sheepdogs would be proud of this too, it must be something in the Canadian air).

That one – to be serious for a second – contains the words “six string razor, and that’s Dangereens in a nutshell. They’ll happily pilfer from any of rock n roll’s draws. It just happens that this time its Mott The Hoople, on “Worried Mind” its any Motown song, “Catpurse Blues” is stealing from CCR, and so it goes.

“1003” and this is not a word that I am throwing about here, is genius. 88 seconds is all it takes to make “Promised Land” by Elvis look like a lot of fuss about nothing, and Yanick Berthiaume proves his worth on piano again (indeed, if this record has an MVP then its him), “Booboo” hasn’t even understood that The British Invasion was 50 years ago yet, and “Nomadic Step” is so full of beans that you don’t even notice the horn section is playing something akin to “Dancing In The Street” at first.

“Holy Water” is a sax filled ballad, like they’re doing a slow dance on “Goodfellas” as Henry Hill narrates. Probably because Chartrand decided it needed a string section as he’d heard girls liked them? Whatever, “(Bye Bye) Little Uptown Girl” has no regrets. It’s doing no confessional, and its ready to go again tonight.

The Dangereens are the rock n roll band you didn’t know you needed, on a mission to save the world from problems you didn’t know existed. “Tough Luck” has been knocking around since about 2020 as far as I can tell, but now, released on a major label, it must, surely, make them the stars in real life that they already are in their minds.

Yes, ok, you’ve heard it before (either literally or metaphorically) but “Tough Luck” wants to do two things and two things only: make lives better and make you smile. So stick your middle finger in the air at 2022 and with this in your heart, give it all you got. Tell them Hugo and the lads sent you.

Previous article
ERNIE, THE FASTEST BLUESMAN
Next article
BAND OF THE DAY: THE SILVERSOUND