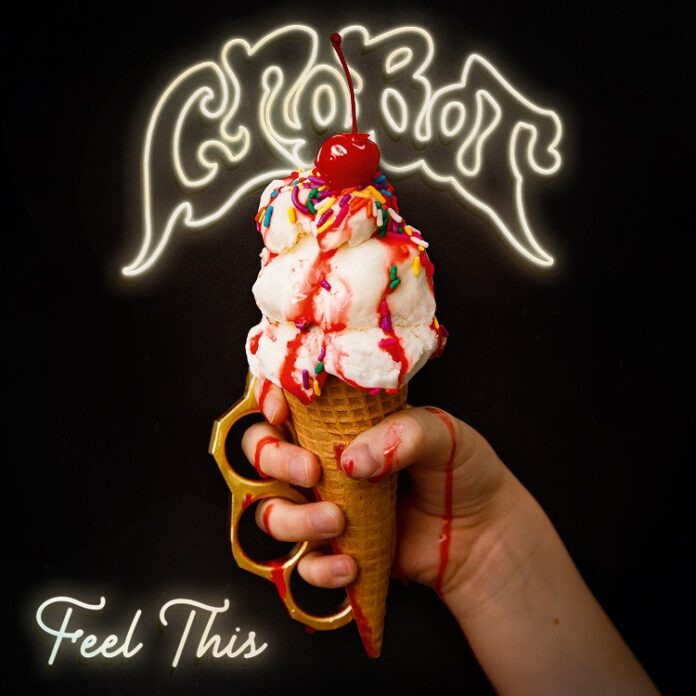 “Look into my eyes and see into my mind”.

So sings Brandon Yeagley on “Electrified”, the very first track on “Feel This”. You know what Brandon, I think I’ll pass, mate, it seems like a scary place.

“Feel This” though is a feel good record. One that comes out, blinking into the light, with only power of rock n roll to save us all. As the irrepressible frontman put it in an interview we printed on these pages: “No need to search any further Beardos! Better Times are here to stay!  You know we wouldn’t have it any other way.  Buckle up and strap it down because Crobot is comin’ back to town.  And with smiles on our faces.”

That’s basically it, and that’s always been it. Ever since they came to our attention at MV when they emailed us their “Something Supernatural” record right at the very start of this websites existence, they’ve been a band that you couldn’t fail to love.

Major label, major tours, major buzz followed, until the world stopped. No matter, not to these boys. Not for as long as Yeagley is roaring the lyrics and Chris Bishop is providing the type of riffs that would make Beavis And Butthead want to break stuff back in the day.

No, instead, “…This” looks at the world and decides they’d best take it.

“Dizzy” thunders. Classic Crobot if you will, greasier than a box of KFC, twice as tasty and wholly finger lickin’ good, “Set You Free” shows a tender side. A sort of ballad, but an enormous one. The type of thing they learned, probably while touring with Halestorm, “Better Times”, though, is the one.

A riff that comes out with as much intent as Lenny Kravitz’s circa “Are You Gonna Go My Way”, but a truly and heroically filthy harmonica toot to go with it. About the joys of being on the road, it begins thus: “dust off your shoes, get ready to go. There ain’t another thing you need to know.”

And you don’t. Not really. Except that these boys are ready. Ready for anything. But god, they’re ready.

There’s a new line up for this one. Eddie Collins has turned up on bass, and he’s to the fore with great effect on “Golden” (and if you like Soundgarden skip to this one immediately) and if “Without Wings” is yet another slice of arena ready rock, then it’s a sound that suits them and suits their ambition.

“Livin’ On The Streets” isn’t hiding its love of AC/DC, “Into The Fire” shakes the foundations, while “Dance With The Dead” contains the immortal line “lets go dance with the dead, you know they know how to kill it.” Glam rock hasn’t sounded more glam and less apologetic in years.

Essentially at this point, Crobot are just about as good as rock n roll gets. “Holy Ghost” underlines that yet again, and “Never Break Me” comes in with something approaching a funkiness, while it all ends with “Stare Into The Sun”. The longest thing on the record (but still less than five minutes) it makes good on the thought that Yeagley has repeated more than once that they never want to make the same album twice.

Sometimes it feels that you review these records and spent 600 words saying what you could say in two sentences (which is why the aforementioned Beavis And Butthead were the finest reviewers ever: everything, basically is ‘cool’ or it ‘sucks’) and there’s a moment at the end of the album that sums up this record better than I ever could. “Sometimes,” sings Yeagley, rather plaintively, “I feel like I don’t belong. I can’t be the only one”. And straight after, there’s the type of solo that lets go a bit like the end of “Paradise City” as if to say, ‘but its alright, we all belong here in music. This music.” That’s Crobot. And that is “Feel This”. If you don’t feel it, then there’s no hope for you.