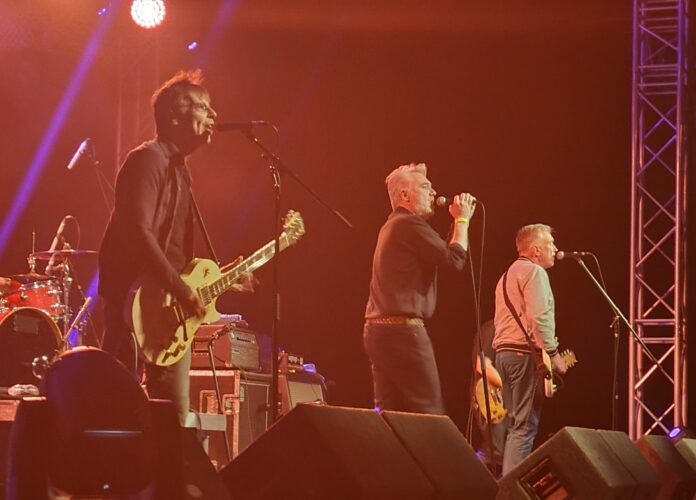 Always leave them wanting more, is the old showbiz adage, and its one that Hugh Cornwell has evidently learned. He finishes tonight and it seems like its all set up for an encore. There’s at least three teases of one, as well. But none is forthcoming. That is nicely in keeping, though, with what had gone on before. There is, reckons Cornwell “a nice sound” in the Coventry Empire tonight. There is, but it sort of helps when you’ve got a band who plays as well as this one does. Windsor McGilvray for example, is clearly not just any drummer. He’d learned from Ted McKenna (Rory Gallagher) and his work here, particularly on “Big Bug” – one of the more experimental pieces that Cornwell includes tonight – is exemplary. It might seem odd to start with the band when the man in the spotlight (as it were) is such an iconic figure in UK music, but it feels like this is a band (completed by bass player Pat Hughes) rather than a vanity project for Hugh Cornwell. The three are little short of excellent in their 50 minutes here. An even mix between Stranglers stuff and Cornwell’s own material, this is a set that is bound together by its quality. It’s interesting to watch him play things like “Duchess” for example, and contrast it with the way the toupe he was in until 1990 does it. It brings out a totally different feel. “Mr Leather” his tribute to Lou Reed, is impressive too. That it mixes with “Skin Deep” and “Always The Sun” and the title track of his most recent solo record, “Monster” (which is about an expert in stop-animation, you know like all the best rock n roll tunes….) is an indication that we aren’t dealing in clichés here. Rather, as “Goodbye Toulouse”, the overt punk of “London Lady” and the abrasive set closer “5 Minutes” prove, this is very much is own man doing things in his own way, like he always did I guess. Hugh Cornwell – and his two band mates – are superb here on their own terms.

About 12 songs in (to be fair, rather like bass player Michael Bradley admits later, I lost count), The Undertones singer Paul McLoone looks the crowd square in the eyes: “You’ll like this one,” he says. “I guarantee you’ll like this one”.

And with that, the one about holding you, holding you tight and getting teenage kicks all through the night is tossed out.

They were always going to play it, of course they were, it is one of the most loved songs of the punk era after all, but to not do it in the encore is worthy of praise.

Perhaps its because for an hour and a half and something like 30 songs, The Undertones – McLoone is the only non-original member of the group – pumped out one fizz bomb of pop music after another.

From “Family Entertainment” (the very first song on their very first album) onwards, you are simply watching a masterclass on how to do it from four blokes that have been doing it for over 40 years.

Pick a song, any song, and its impossible not to feel uplifted. “You’ve Got My Number (Why Don’t You Use It?), “Jimmy Jimmy” and the rest are sugar rushes of goodness, frankly. And its not just the “hits” either. It doesn’t matter whether these were on Top of the Pops in 1980, or John Peel’s favourite song. No, quite simply, The Undertones are gifted at being The Undertones.

Their more recent stuff (that is to say the couple of albums since McLoone joined) are well thumbed, “Thrill Me”, “Oh Please” and the rest stand up well in the set too, simply because they whizz at you. The fact that there are so many original members helps too. There’s a chemistry, and it means “Nine Times Out Of Ten” almost distils rock n roll as the O’Neill brothers slip seamlessly into the guitar and their harmonies on “Dig Yourself Deep” are as perfect as the sounds of summer should be.

“Get Over You” (“this is the time when we say goodbye, but we’re so showbiz we’re coming back” laughs Bradley) gets us to the encore, and “Male Model” is a highlight amongst many that sparkle. “I Know A Girl” is the perfect vehicle for the flamboyant singer too. Never having seen the band with Fergal Sharkey in their ranks, I am purely speculating here, but I imagine that the dynamics of the group have altered totally with a frontman such as McLoone being from what we might term “the classic mode.”

He’s as fabulous as the rest of them, and as “My Perfect Cousin” really does end things, then it really is Kevin’s loss that he didn’t want to do this. Indeed, your mind wanders back to the words that Bradley had said when they entered the stage: “We’re The Undertones” he’d shouted. “And we’re too busy singing to put anybody down.” The cheeky monkey’s, indeed.

Look, if you didn’t come out of this gig happier than when you went in, there’s no hope for you. Teenage Kicks for middle aged crowds do not get any better.