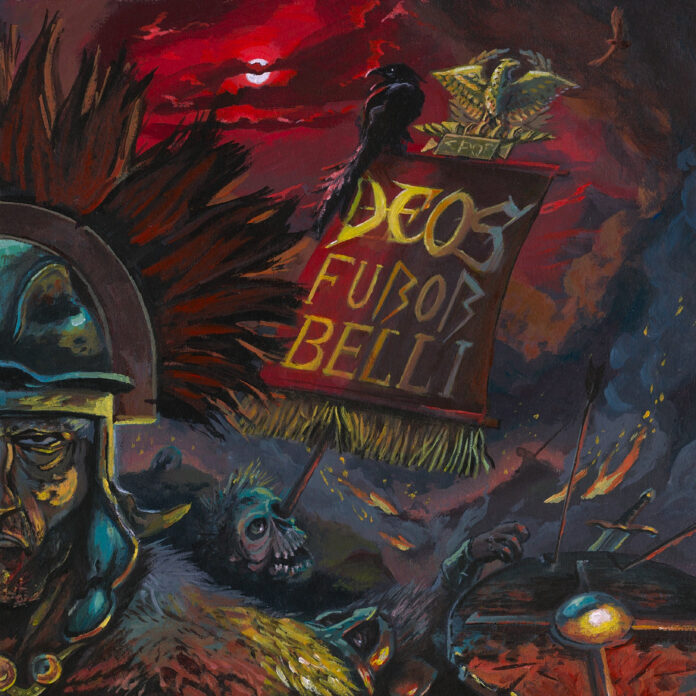 Formed in 2014 you may be forgiven, but not by me, for coming across this ferocious foursome for the first time.  If so, you have picked a fine time to make their acquaintance.  Furor Belli is the band’s third album release and is arguably their best.  For this release they have adopted a more raw and direct approach than previously, gone are the keyboards.  The band have had a steady rise to prominence through their previous two albums and tours across the European continent with ADE.  The band have gone through a few changes in their relatively brief history and the line-up now consists of Jack Graved (bass/vocals), Fabio Battistella (guitars/b.vocals), Loic Depauwe (drums) and Cedric Boehm (guitar/b.vocals).  It is a collaboration that is perfectly suited for the style of music they wish to create.

The intro is a familiar Roman themed piece that warns of what it is to come.  What comes is “Decimatio”, the meaning of which comes from a form of discipline in the Roman military whereby every tenth man in a group was executed by members of his cohort, and it is a typically powerful and swaying assault of the ears.  Driving drums and razor sharp guitar lines inbetween moments of slow tempo respite merely enhance the grand sweeping death metal majesty.

“Cerberus” follows instantly and could almost act as the second half of the opening track.  The band are truly plumbing the depths of the darkness for this track with the mythological Greek multi-headed Cerberus, or Hound of Hades as it may well be more commonly known, guarding the gates of the underworld so no-one escapes.  Musically lovers of death metal will wish for no such escape from this fiery four minutes of bristling death.

“Primus Pilus” takes a more thrash military vibe with its marching rhythms and controlled aggression.  After the first three tracks the scene is well and truly set and what follows over the next 30 minutes or so is nothing short of sonic excellence.  Other highlights include, but are not restricted to,  “Morituri Te Salutant”,  a musical war-cry that could have been a theme to Caesar’s crossing of the Rubicon……..if Gaius Julius decided to form a band whilst on his gallic conquest!!.  Also special mention should go to “Germanicus” a dynamic and divergent track regaling the legend of the Roman general.

When all things are considered if you have never heard Deos before once you have listened to this album your transformation will be complete.  You will now be one of the legion.  “Alea iacta est”.